Marvel super hero fans had a real treat during the commercial fest that surrounds the NFL’s Super Bowl with the TV trailer for Marvel Studios’ “Avengers: Endgame.”

The trailer opens up with a world struggling to deal with the departure of 50% of every single living thing after Thanos snapped his Infinity Gauntlet. Steve Rogers, aka Captain America, is even seen attending a support group in a school.

But don’t worry, we quickly get to super hero time:

Tony Stark and Nebula have joined forces to fix the ship they left Titan in and try to get back to Earth before oxygen runs out.

Back on Earth four of the remaining Avengers stand outside the Avengers HQ looking skyward in surprise. Looks like the band is getting back together.

Rocket has finally returned to Earth too, apparently at at fishing village somewhere.

The Black Widow takes out some anger shooting target practice. Revenge appears to be on her mind.

Ant-Man did figure out how to reunite with the Avengers after all. His newly acquired skills from surviving in the Quantum Realm may come in handy.

Also returning are Thor and Hawkeye. Just where is Thor looking out at? Is he tracking down Thanos to the last place we spotted him to finish the job?

That scene with Captain America strapping on his shield on more time probably has a lot of meaning. Let’s hope it’s not the last time we see him in action. 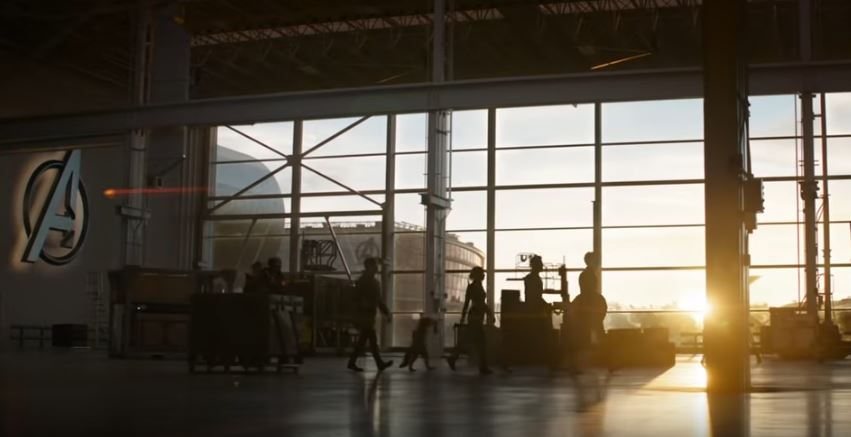 Then there’s a moment of controversy brewing. In the final scene where the Avengers have assembled, it looks like there’s an odd gap in the line. There’s already speculation that someone has been edited out of the footage. It might just be some unfinished digital production, but could Marvel be hiding a character from us?

The leading contender is Shuri the Wakandan technology expert and sister to T’challa (aka Black Panther), who was only missing at the end of Infinity War, not snapped into dust.