Forget all you know or think you know… Would you believe me if I told you it’s been 30 years since the Ron Howard & George Lucas classic “Willow” was released by Lucasfilm? Of course, now that Disney owns the Lucasfilm library, “Willow” is officially part of the Disney family. This release is the first “Willow” issue from Walt Disney Studios Home Entertainment.

We’re big fans of Willow Ufgood as played by Warwick Davis and Val Kilmer’s take on the swashbuckling warrior Madmartigan is iconic as well. We also loved the comic relief by the Brownie duo, Franjean and Rool played by Kevin Pollak and Rick Overton. 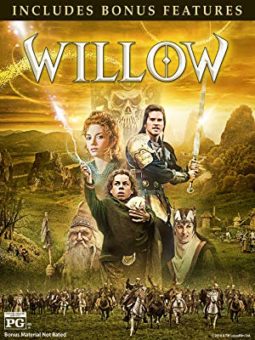 There’s a new 30th anniversary version of of “Willow,” that’s available as blu-ray and for the first time ever as a digital release. You can download the digital copy on Amazon or iTunes today.

Early reviews say this release is similar to the 2013 DVD release with its excellent remastering, but they have restored the 2001 commentary by Warwick Davis which is a very good reason to pick up this 30th anniversary edition.

Warwick Davis has been celebrating by sharing a few photos from his collection on Twitter:

To celebrate the 30th Anniversary digital release of #Willow, here’s a photo taken at the Cannes Film Festival in 1988. Myself, @ValKilmer, @RealRonHoward and Joanne Whalley were there to promote the film which was screened to close the festival too. I think we look like a band! pic.twitter.com/2oyxRHF853

One more #Willow pic from the archive… myself and George Lucas take time out in the tavern interior set. At the top of those stairs the smell of gone off pheasant used as set dressing was overwhelming! #ThatsShowbiz! pic.twitter.com/ArSoAScEh6

We’ve been tracking rumors of a potential sequel. If you would like to see one, be sure to download the 30th anniversary release and show Disney and Lucasfilm there’s demand for a return to the world of Willow.