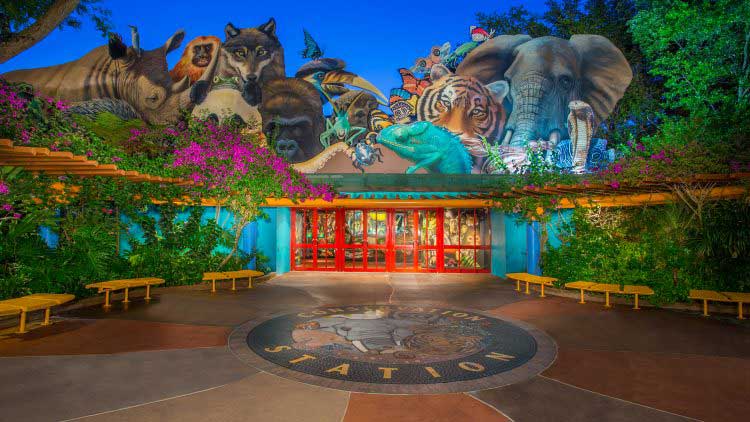 The big rumor over the weekend was that Disney’s Animal Kingdom will be closing Rafiki’s Planet Watch. Cast members were reportedly told that the conservation themed land would be going to a seasonal basis beginning in October. Others heard that it was permanently closing, although the veterinary care would continue. If the closure is permanent, many of the character meet and greets and animal encounters currently at Rafiki’s Planet Watch would be relocated to other locations in the park.

It’s uncertain if this is just belt-tightening on Disney’s part, or if it signals the first move in a long rumored addition to Disney’s animal park. If it’s an expansion, expect to hear something at the upcoming D23 event.

The plot of land north of Asia connecting it to Rafiki’s Planet Watch has had multiple projects rumored for it. From a Wizard of Oz themed land to Australia and lately a Zootopia themed expansion, fans wait for any official big news. If there is a new project, I wouldn’t expect construction to begin before 2022, but I’d be happy to be surprised with a project before then.

Recent fan speculation has turned toward a Wakanda makeover for Rafiki’s Planet Watch rather than an entire new land. I’m fairly certain the Universal contract for all Avengers characters in Orlando area themeparks would prevent Disney from building a Wakanda attraction that mentions Black Panther and what would be the point of building anything Wakanda without its King.

If Rafiki’s Planet Watch is closing, what will Disney do with Wildlife Express Trains? There are a few areas of Walt Disney World were permanent rail transportation would make sense. It would be great to have a way to get from the front of EPCOT to the back without walking. I’d prefer a peoplemover type technology, but trains would do. It might also make sense to run trains between the Disney’s Animal Kingdom Lodge and the park itself.

Rivers of Light is said to be getting an update that will replace the live actors with Disney characters who will be the audience’s hosts for the show. This could be coming sooner rather that later.

Disney has already announced a host of new entertainment options for 2019 at Disney’s Animal Kingdom.

I think this is more wishful thinking by fans, but there’s been a long rumor that an Indiana Jones attraction would be coming to Dinoland USA and that Dinoland would get a new theme. I don’t see it happening. First, the next Indiana Jones movie keeps getting pushed back, second Dinosaurs have a universal appeal.

When Pandora – The World of Avatar was constructed, Disney left room for a third expansion, but it seems too soon for that. They’ll probably wait until after they see if the new Avatar movies from Fox are a success or not. That said, a few sites are speculating that the third attraction may be coming sooner than expected.

I’ll be honest, I’m not wild about either Wakanda or Zootopia coming to Disney’s Animal Kingdom as a whole new land. The focus should be on nature and animals in the park. Zootopia features the personification of animals in a way that detracts from nature. I still think an Australia expansion is the best bet. It gives the park room to include sea animals and mammals that Disney currently doesn’t have at the park. There’s also a natural tie-in opportunity with the Finding Nemo/Dory movies and Rescuers Down Under (don’t forget The Rescuers!).

Walt Disney World is expected to make one big change to Disney’s Animal Kingdom in time for the resort’s 50th anniversary in 2021. We know it’s not a major attraction as the infrastructure changes for that would have to be under way already. Perhaps it’s a return of a parade, but more likely an entirely new show for the Discovery River stadium. What would you like to see?