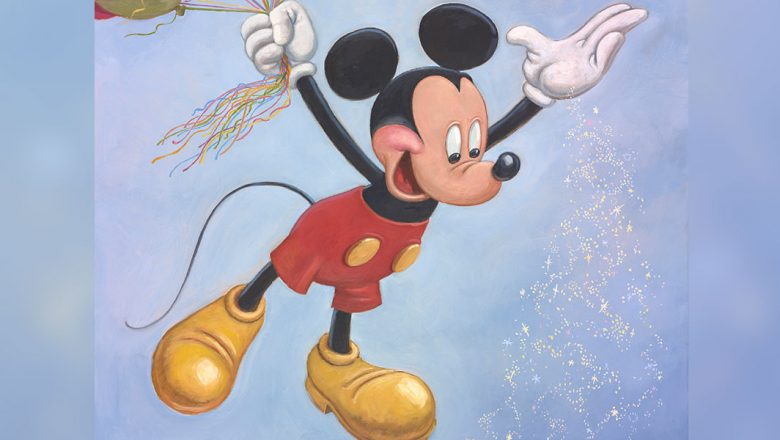 The Walt Disney Company and Disney fans everywhere are celebrating the 90th anniversary of Mickey Mouse. A new birthday portrait titled “Spreading Happiness Around the World” was painted by legendary Walt Disney Animation Studios animator Mark Henn. The unveiling of the new work—the latest in a longstanding series of Mickey birthday portraits—took place during the panel “Celebrating 90 Years of Mickey Mouse with D23: The Official Disney Fan Club” at the San Diego Comic-Con.

Since his first public appearance in “Steamboat Willie” on November 18, 1928, Mickey has been the global ambassador for The Walt Disney Company. From the beloved Mickey Mouse Club to today’s Mickey Mouse cartoon shorts, Mickey’s optimistic outlook and endearing personality continue to delight fans around the world every day. Henn follows in the footsteps of artists such as Disney Legend John Hench, who crafted five of Mickey’s official portraits. 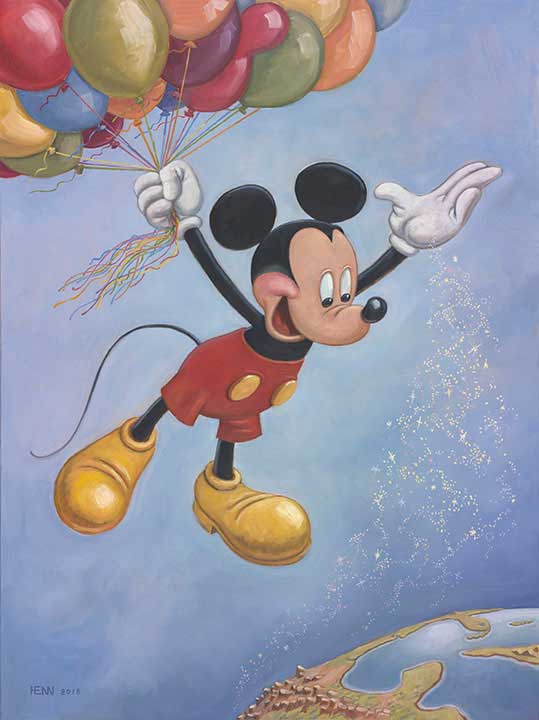 “It is one of the great honors of my career to be asked to paint Mickey’s 90th birthday portrait,” says Henn. “I was greatly inspired by the portraits painted by John Hench. I wanted to capture some of the same style and sense of youth that John achieved in his portraits.” The painting will appear on the Fall 2018 cover of Disney twenty-three, the quarterly publication sent exclusively to Gold Members of D23.

Mark Henn is a veteran animator at Walt Disney Animation Studios. Henn is currently working with the animation team on the upcoming feature Ralph Breaks the Internet. Henn most recently served as a 2D animator for the “Mini Maui” character in the Academy Award-nominated Moana. Henn also served as the lead 2D animator on the Academy Award-winning Big Hero 6 and Frozen. Among his many credits at the studio, Henn served as supervising animator for Ariel in The Little Mermaid, Belle in Beauty and the Beast, Jasmine in Aladdin, Young Simba in The Lion King, title characters Mulan and Pocahontas, and Princess Tiana in The Princess and the Frog. In 2000, Henn traded his pencil for a director’s chair on the award-winning short John Henry, based on the popular American legend.

D23 and the Walt Disney Archives, in partnership with Walt Disney Animation Studios, commissioned Henn to paint Mickey’s official birthday portrait. Fans are encouraged to use the hashtag #Mickey90 to share their love of Mickey Mouse’s optimistic outlook and endearing personality on social media.