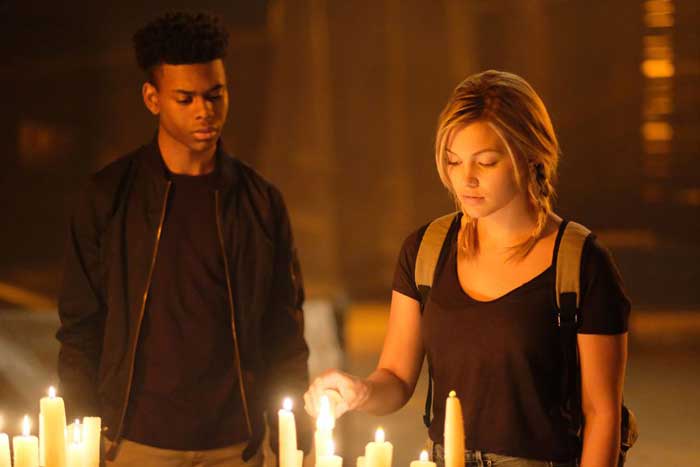 Pleasing critics and drawing big numbers for Disney’s teen focused cable network Freeform, Marvel’s “Cloak & Dagger” had a big presence at this year’s San Diego Comic-Con. The show took the opportunity to preview its final two episodes of season one and announce that the series has been picked up for a second season. The “superhero show of the summer” (Vulture), will be back with 10 all-new episodes promising mayhem in spring 2019.

Onstage at SDCC to deliver the good news to fans in Ballroom 20 were cast members Olivia Holt, Aubrey Joseph, Emma Lahana and Ally Maki, along with executive producers Joe Pokaski and Jeph Loeb. The panel also included a special sneak peek at the upcoming two episodes including the finale where everything comes to a head for Tandy and Ty as the city of New Orleans is thrown into chaos. The two realize that it is time they face their destiny and test their powers as “The Divine Pairing” to save the city.

The premiere episode of “Marvel’s Cloak & Dagger” is Freeform’s No. 1 series debut in two and a half years, accumulating 4.4 million viewers across all platforms according to the new L+35 ratings this week. The critically acclaimed show is also the No. 1 new cable drama of the summer in the network’s key demos (W18-34 and F12-34) and was Freeform’s highest-ever debut with male viewers (M18-49).

Tune in on July 26 at 8 p.m. EDT on Freeform to catch the penultimate episode of season one where we find Tandy in a downward spiral, lashing out at strangers and loved ones alike. While simultaneously trying to help Tandy and reconcile with his own family, Tyrone faces an obstacle that threatens his success. Separately, Brigid’s life leads to a reckless streak of her own as her search for justice goes sour. However, all these individual events meet up to cause certain doom for New Orleans.

“Marvel’s Cloak & Dagger” is the story of Tandy Bowen (Olivia Holt) and Tyrone Johnson (Aubrey Joseph) – two teenagers from very different backgrounds, who find themselves burdened by and awakened to newly discovered superpowers which are mysteriously linked to one another. “Marvel’s Cloak & Dagger” is also the No. 1 most social new scripted cable series, generating more than 1.5 million engagements across Twitter, Instagram, Facebook and Tumblr.

Are you watching Marvel’s Cloak & Dagger?