A roadmap to a third gate at Disneyland needs Gardenwalk

The property Gardenwalk sits on today is a key part of the future of the Disneyland Resort and the company might have a second chance at acquiring it. Sandwiched between two busy Anaheim roads (Disney Way and Katella) where there isn’t a lot of foot traffic, the GardenWalk complex has struggled with finding a profitable niche for its owners and vendors. Now word is the property is on the market and being shopped to prospective buyers.

When it was first announced, the outdoor mall location was going to have big named luxury hotels, including possibly a Disney branded hotel or two, to provide some built in foot traffic and a number of big high-end restaurants that would then attract shoppers into the stores before and after their meals. Those hotels never came and many shops were unable to stay open (or open at all).

Eventually management ditched the idea of being a shopping mail and instead intended to transform into an ‘eater-tainment’ destination. The House of Blues Anaheim moved from Downtown Disney to Gardenwalk and for a brief while things were looking up.

However, it appears that this pivot to food and fun wasn’t enough. Most of the upper level and a good portion of the main level remains unoccupied.

If I was in charge of the Disneyland Resort, I’d think seriously about acquiring this property. It’s half a block away from Disney California Adventure and across Katella from one of Disneyland’s remote parking lots. This lot has long been rumored (back to when it was a Strawberry field whose owner refused to sell to Disney) to be the potential site for a third gate for the Disneyland Resort.

Disney also owns a plot of land on the other side of Disney Way. It contains a couple parking lots, some new ‘backstage’ buildings and a hotel that connects that property to the main Disneyland resort esplanades. (This is the area that was to become the Eastern Gateway, but that project was recently abandoned.) 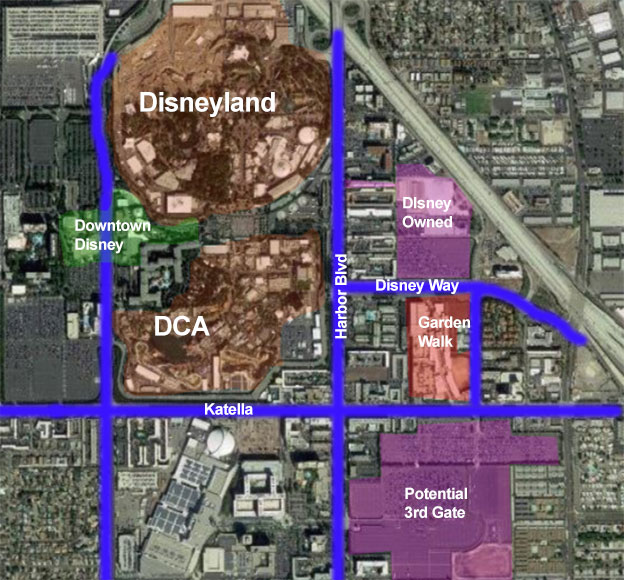 It’s almost as if the planners of Gardenwalk expected Disneyland to build a third gate which would drive people right into the shopping mall as a way to connect the three theme parks. That’s not in the cards right now, but it could be soon.

Disney California Adventure is surrounded on all four sides with very little room for expansion left. The Disneyland hotels and Downtown Disney complex is so compact, Disney is building a hotel right on top of where some of the stores and restaurants are right now. Two new parking garages on the west side of the resort will also lock-in that real estate meaning the resort just can’t expand any further west.

That leaves this big open parking lots bordered by Harbor Blvd and Katella which Disney owns. There is definitely room there for a theme park and backstage services at least the size of Disney California Adventure. If Disneyland bought GardenWalk, they could place a parking garage across Disney Way, build those big hotels next to Garden Walk and rename it Downtown Disney Too (or something cheesy like that) and then connect it to the rest of the resort via other property they recently acquired.

As you can see by the map, Gardenwalk is the missing piece in the Disneyland resort’s future.

We’ve heard that Disneyland has been making inquiries into purchasing more hotels that line Harbor Blvd both north and south of Katella. Hopefully they’re in talks for Gardenwalk too. This might be the only chance Disneyland gets to own the Gardenwalk property for the next 100 years. If Disney ever thinks they might build a third gate, it would make sense to own the property that connects it with the rest of the resort infrastructure.

If Disneyland did announced a third gate to help the resort contineu to grow after Star Wars: Galaxy’s Edge opens, what themes would you suggest they consider? Heroes vs Villains? WestCOT? How about a climate controlled water theme park?