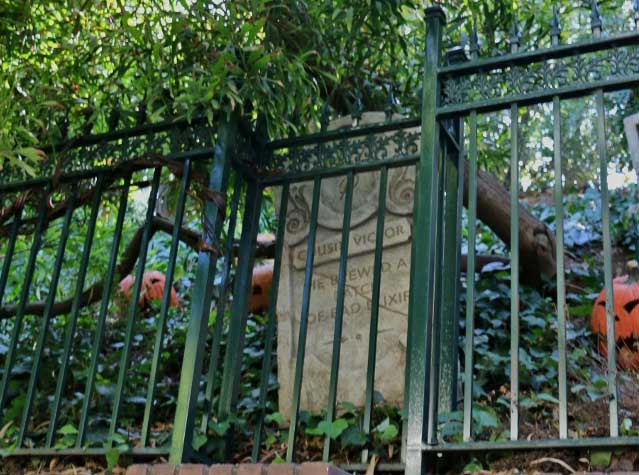 How does it feel to complete one’s quest, obtain the grail, discover gravity? I may not know, but I do know how it feels to have my personal mini-quest resolved. For years now I’ve privately worked with people I knew in the Disney organization to get my grandfather’s honorary gravestone at the Haunted Mansion, which served as his credit for the attraction, restored. About two years ago, I took that campaign public with a post on this blog. Then just a few weeks ago, I was told to keep an eye on the hill. I sent a few minions to the park to check and low-and-behold, there were a host of new gravestones back on the hill, including one for ‘Cousin Victor’ aka my grandfather – Vic Greene.

Haunted Mansion fan site “Long Forgotten” has written an excellent account of the gravestones return to the hill behind the Haunted Mansion. Calling the original family plot grave stones the ‘great eight” (an appellation I like), the blog goes into great detail comparing the original markers with the new, along with a few well-placed critiques of the project.

In this Disneyland video, Imagineer Kim Irvine (Art Director at Walt Disney Imagineering and daughter of Leota Toombs (who you see as the floating head in the attraction), explains Disney’s version of the history behind the tombstone’s disappearance and eventual return:

I have yet to make it out to Disneyland myself to take in the new grave stones. But I hope to get a chance before someone decides to take them out again.

Have you seen them? What do you think?