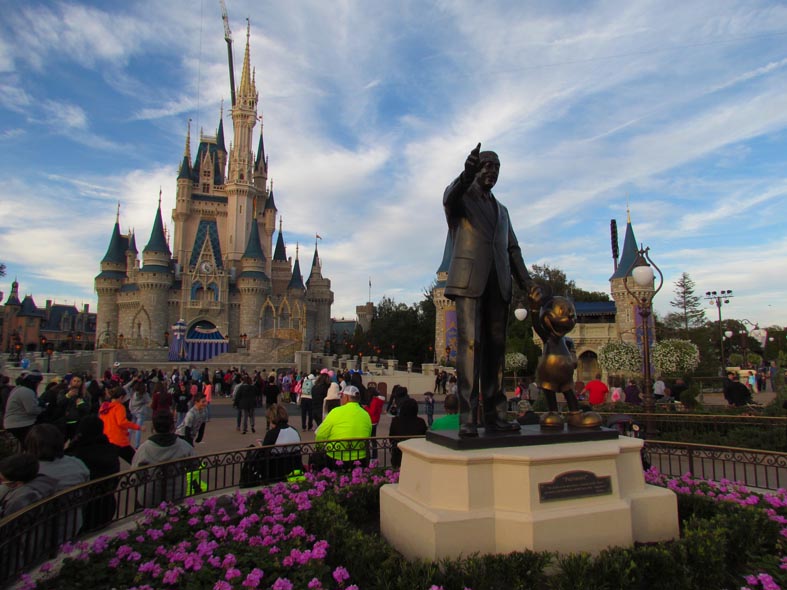 Update: 9pm – Now that everyone is out of the parks and stuck in Disney resorts for the night, we’re getting reports of hotels running out of food. Even the candy and snack type foods in the hotel stores has een cleared out. Earlier at some resorts there was an opportunity to buy a boxed lunch. Alas the for $13 it cost the food was pretty unappetizing.

Disney really could do better than that, I think.

Orange County is in curfew from 10pm to 7am and Disney and the County Sheriff both recommend that you stay inside pretty much the whole length of the storm. Pretty much every store was closed by 6pm so their employees could get home safely. So your opportunity to get out and get food is over. Hope you have a krispie treat stored away somewhere.

Update 5pm – Due to expected severe weather related to Hurricane Matthew, Walt Disney World has just closed its parks for only the fourth ever time. All previous closures were also related to Hurricanes. (Although the park’s closed early on 9/11, they did reopen the next day.)

Please keep all central Florida residents and visitors in your thoughts tonight, with an extra special thought for cast members of Orlando’s great tourism and hospitality industry who are riding out the storm away from their family to provide service for their guests.

Those workers have been busy securing loose items like trash cans and outdoor food vending carts.

WDW is securing trash cans and wrapping light fixtures as part of their preparations for Hurricane Matthew https://t.co/TSNkSgpRVz pic.twitter.com/RLMj4b0rzN

You can't tell which countries some booths represent because they took their sign down for #HurricaneMatthew #EpcotFoodFestival pic.twitter.com/A0ojjykDVu

Update 4pm – Resorts at Disney and Universal are informing guests that they expect most food locations to be closed tomorrow. Most are making available box lunches for purchase, but if that doesn’t strike your fancy, you may want to stock up now. Some Disney resorts have provide guests in rooms with flashlights and spare batteries in case the power goes out. Guests are being asked not to leave their rooms during the storm.

Hurricane Matthew is a slow moving Category 4 storm. Right now tropical storm force winds are expected to start reaching Orlando area between 9pm and 11pm and continue until we start to feel Hurricane force winds starting as early as 2am Friday and continuing as late as 2pm. Tropical storm forced winds will continue for another 4 to 6 hours after that. So plan to be inside pretty much from 8pm tonight until 8pm or later on Friday.

Orlando Transportation will start to shut down around 5pm tonight as Lynx buses start their last service at 5pm today and will not operate on Friday. SunRail service is also suspended as right now and won’t return until Monday. The Orlando International Airport will shutdown tonight at 8pm. Call your airlines now to reschedule, likely without penalty or fees.

Disney Cruise Line has announced a number of itinerary chances and one cancellation.

Update: Walt Disney World just announced all parks will be closing at 5pm tonight. All Orlando parks are expected to be closed on Friday as worse part of storm passes region

Update: 11am – Universal Orlando just announced early closing today at 5pm. The Orlando International Airport will shutdown at 8pm. Expecting to hear from Disney World at some point.

Continuing our third day of coverage on the impact Hurricane Matthew is expected to have on Central Florida and its tourist attractions. With time running out for a significant shift East in its course, it’s looking more and more likely that the hurricane will head right up the East coast of Florida as a strength 4 hurricane bringing 125 mile hour winds with gusts up to 150 to the millions of homes and businesses from West Palm Beach all the way up to Jacksonville. Damage from Matthew will be extreme for everywhere the intense winds go.

Likewise, it won’t take much for Hurricane Matthew to jog to the west sending those powerful winds directly over Orlando, its residents, and its world famous tourist attractions and resorts. If that’s the case there’s likely to be severe damage inland as well. If you’re in the cone that indicates the potential path of Matthew make sure you’re prepared. Even if the path stays to the east, guests of 80 MPH or more are possible right over the attractions area. This is not a fast moving storm either, so expect hurricane force gusts and winds for several hours starting tonight and through Friday.

If you’ve decided you want to leave, the time to go is now. The last flights will leave from Orlando International Airport this afternoon and roads heading west are already clogged with traffic.

As of this moment, Walt Disney World’s theme parks are scheduled to open as normal today, only Blizzard Beach water park will be closed. Mickey’s Not-So-Scary Halloween Party has been cancelled for tonight. For Friday, only the water parks have officially been cancelled.

ESPN Wide World of Sports has cancelled afternoon events for Thursday and rescheduled many others. Fort Wilderness Campground will close at 11AM today and guests in resort rooms with water access (like the Bungalows at the Polynesian) are also being relocated. Disney World resorts are no longer accepting reservations for the next few days. Expect the parks to be busy today securing food booths, and other other potential debris, making sure that there is nothing left to blow around causing damage.

If you’re staying on property check with your hotel for their plans for tonight. You’ll want to be ready by about 6 or 7pm tonight when the first big bands of Matthew whip through the area. If you’re looking for a hotel room tonight, try Air-BnB and Expedia for availability on Florida’s west coast and panhandle.

We’ll be updating this post throughout the day as I get a chance. Please stay safe and don’t take any extra-ordinary risks.