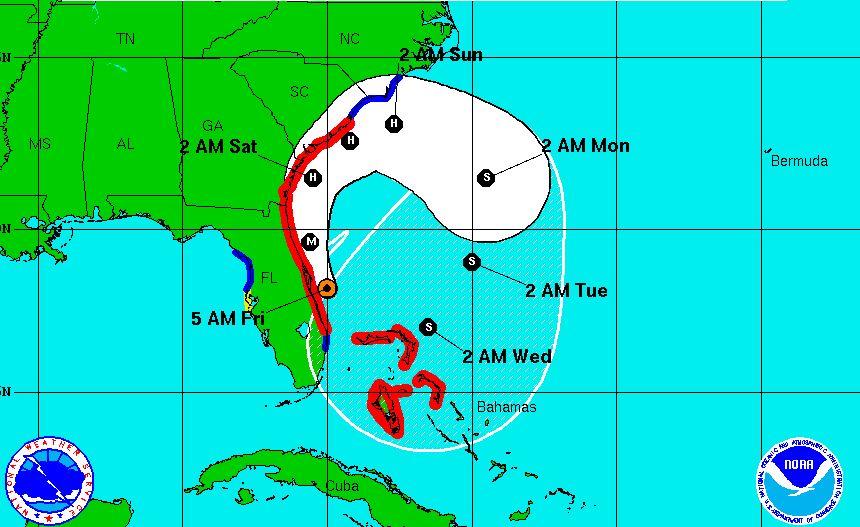 Update: 6:00pm – Curfew was lifted at 2pm and Disney Springs opened at 5pm with limited locations and primarily to give resort guests something to do tonight.

Update: 12:45 pm – Just heard that all four Walt Disney World parks are now scheduled to open at 8am on Saturday. This is a earlier than normal for most parks. Animal Kingdom will have Extra Magic Hours from 7am – 8am. Disney World’s two water parks and Disney Springs will return to normal operating hours.

Update 11:15 AM – While we don’t advice it, some guests are out and walking about at various resorts. Most damage is some flooding, a few large branches on the ground, and lots fo smaller debris. Hotels are opening their dining facilities to serve guests (Pop Century has limited options but is open). While livestream videos show things are pretty calm across Walt Disney World, it’s still very windy and tropical force wind gusts are still a possibility, so we recommend staying indoors unless you absolutely have to go outside.

There’s a saying forecasters like to use with Hurricanes, “Prepare for the worst, hope for the best.” With every attraction in Orlando closing early yesterday and planning to remain closed today, I’d say that everyone did a good job preparing. The good news for Walt Disney World and other Orlando tourist attractions is that Hurricane Matthew shifted course to the East. This kept hurricane force winds out of the interior of Central Florida greatly reducing the chance of damage at the parks.

The biggest problems seemed to be at Disney resorts as everyone returned from the parks at the same time and tried to get food. The hotel food courts just weren’t meant to handle that demand. So you ended up with crowds like this

Vacationers at Walt Disney Resort in #Florida were evacuated ahead of hurricane #Matthew. The resort will remain closed through Friday. pic.twitter.com/obPbOIm4Lo

It’s not all sunshine and rainbows out there, there are still more than 275,000 people in Central Florida without power right now and there are some reports of property damage along the coast. At the time of writing much of Volusia county, which includes Daytona Beach, is still under extreme winds watch and a flood warning. Flagler County, which is just to the north, could also see serious damage and flooding.

If you do see a downed power line, do not touch it. Report the power outage to the power company. If you absolutely don’t have to get out on the roads for work, stay home. Let the first responders and power crews do their jobs today.

We live about six miles to the East of Walt Disney World resort and can report things are generally fine here with only some heavy gusts. In years past, when the was a severe weather warning but no actual damage, Disney has been known to try and get at least one of its parks open for resort guests only. We’ll keep our ears to the ground to see if any announcements are made today.

Additionally, we’ll see when Orlando International Airport is able to resume flights in and out. A lot of tourists are essentially stranded in Orlando until those flights resume. Be sure to check with your hotel to find out what their policy is in this situation.

Finally, as you can see from the projected path cone for Hurricane Matthew, the storm is expected to loop around and make another landing on the Bahamas and possibly Florida as a Tropical Storm or Hurricane. So keep the folks of Haiti, the Bahamas, and other Caribbean nations, in your thoughts.

As we said, it ain’t over yet for a lot of Florida residents, but it isn’t the worst case scenario either. If you were staying overnight in Central Florida for Hurricane Matthew, either as a resident or guest, what was your experience like?