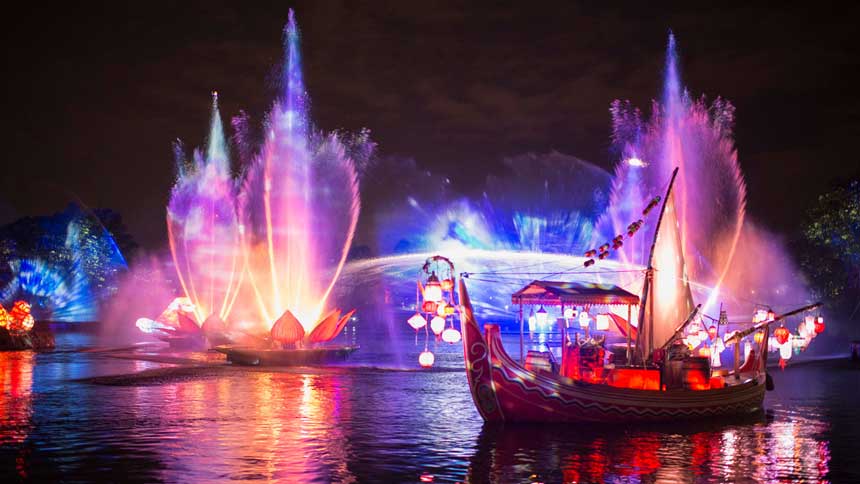 Update: This is more than just Rivers of Light being postponed. Updated within the story.

In an unusual move for Disney World, they have announced that the scheduled premiere for the much anticipated “Rivers of Light” water pageant at Disney’s Animal Kingdom has been pushed back off the original April 22nd opening. Additionally, the other night time offerings that had announced for Disney’s Animal Kingdom have also been postponed. These include, the ‘sunset safari’ at Kilimanjaro Safari, the Discovery Carnivale, the Tree of Life awakenings show, and additional entertainment that had been planned for around the park.

Disney now says to anticipate a new date to be announced later this Spring. It’s good that they gave fans advanced notice, but considering the lead time involved in planning a vacation, I’m sure there will be countless disappointed fans.

From the newly shared image above, featuring our first look at the Lotus Flower floats with functioning water fountains, you can see how beautiful the finished “Rivers of Light” show is intended to be. We will just have to wait a while longer to see it.

The word coming out from the Rivers of Light production had been mixed. The show itself looks amazing. The lighting, the fountains, the floats, and the viewing stadium are all great and make use of some fancy technology. However, due to some technical issues, they were behind schedule and forced to start doing some technical rehearsals during park hours.

As evidence, we saw physical damage on the beautiful floats. Word was that the GPS automated navigation system that was supposed to control the floats was not working as precisely as the show’s producers wanted. The result was boats out of position and bumping into each other. I also heard a rumor that Disney CEO Bob Iger was in town to check out an early rehearsal and was not happy with what he saw.

To be fair, Disney was trying some very innovative stuff with this show. I didn’t expect it to all come together smoothly. The result of delays and technical issues means that, for now, “Rivers of Light” must retool and rework until it’s finally at the level polish that we’ve come to expect from Disney.

I’m still really excited about the night time experiences coming to Disney’s Animal Kingdom. Just look at this show coming to the iconic Tree of Life.

All that stuff is projected onto the trunk and branches of the tree. It will be visible from both the Rivers of Light amphitheater area and directly in front of the Tree of Life on Discovery Island.