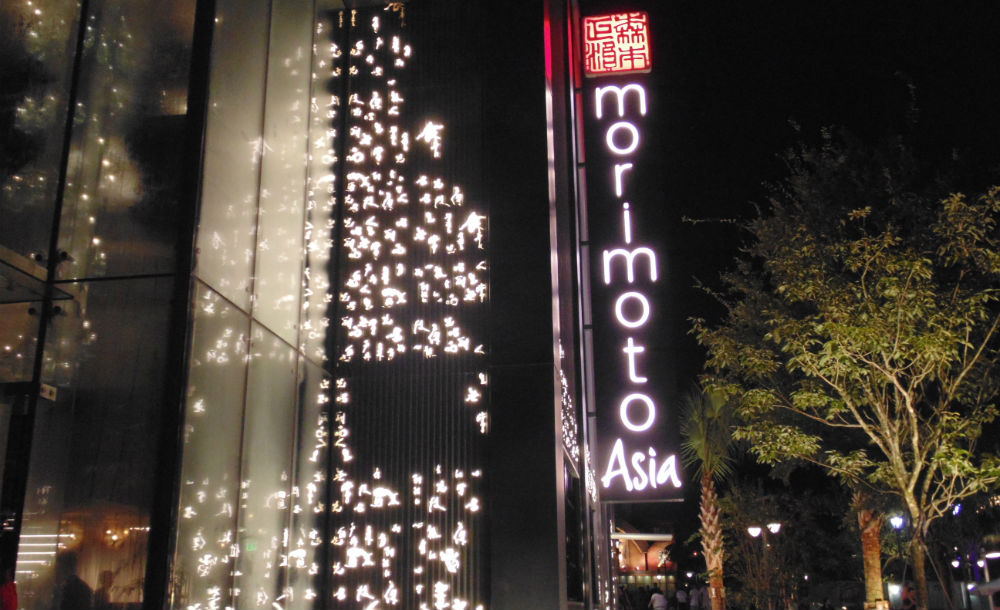 Morimoto Asia, the first pan-Asian restaurant from Iron Chef Masaharu Morimoto in a collaboration with the Patina Restaurant Group, opened Wednesday, September 30 at Disney Springs. But the night before, I attended a media preview headlined by Morimoto himself, and it was spectacular.

The event kicked off with a dedication ceremony set to the pounding rhythms of Japanese drums and a dancing dragon. After a short speech by Maribeth Bisienere, Senior Vice President of Disney Springs, Chef Morimoto danced down the stairs and proceeded to talk about his vision for the restaurant, which included him serenading us with a song.

The quintet then finished with the traditional breaking of the sake barrel with mallets, and we were all served the sake in very cool square wooden cups with the Morimoto logo on the side.

The restaurant interior is simply breathtaking. Seating is available on two levels, connected by a wide glass-sided staircase. The main floor contains curved booths and rounded tables, and this area sits underneath several long dangling glass-beaded chandeliers that serve to diffuse the light from the ceiling…plus they offer a complete wow factor to the design. The second floor features a variety of seating from open ended lounging sofas with pillows to tables and chairs.

Glass figures heavily in the design, as the main kitchen is viewable behind a full wall of glass, and the second floor railing also has glass panels. The color scheme is dark woods, accented by black, cream, and red. The staff reflects those colors, as well. The hostesses are garbed in red satin full-length dresses, while the servers wore solid black.

But let’s face it…no matter how pretty a restaurant looks, it’s the food that matters, and Morimoto Asia definitely delivers the wow factor with that, too.

We got to try passed sample servings of several main dishes from the menu, from Orange Chicken to Shrimp Tempura to Duck Caesar Salad to Crab Rangoon. Everything we tried was delicious. Seriously. There was a lot of sushi, bright and colorful, and the bites were snapped up as fast as the servers could bring them.

I couldn’t try the seafood due to an allergy, so my favorite sample was the Orange Chicken, which had a bright fresh orange taste without the cloying sweetness I sometimes encounter with the dish. I also enjoyed the vegetable sushi. My guest really enjoyed the Shrimp Tempura, and said it was the first time she’d really enjoyed eating shrimp in a long while. She also liked the Korean short rib.

After we’d all had a chance to sample the food, Chef Morimoto called everyone down to the main floor for a culinary display that first had him breaking down a 100lb Hawaiian big eye tuna. Then when the tuna was sushi ready, it was used to make a 60ft long maki roll. Everyone pitched in when it came time to roll, even Valenti and Mickey Mouse himself.

As the evening wound down, the server brought out several sample-sized desserts ranging from mochi-mochi with edible flowers to churro fondue (never thought of churros as Asian, but they were delicious).

We also had a chance to try a few signature drinks from the bar menu. The Shirayuri (White Lily) is made with sudachi shochu, calpico and yuzu, and the creamy white concoction is served in a martini glass with an edible flower. It was ok, but didn’t have a strong taste. You could easily drink this fast. I was told this was a favorite among the guests in attendance that evening.

I also tried a Lemon Grass Mojito, made with leblon cachaça and lemongrass syrup. Mojitos are a favorite of mine, and I enjoyed the fresh, crisp taste the lemongrass provided the drink. 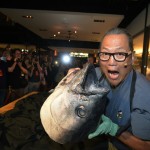 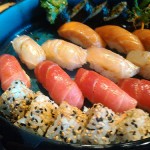 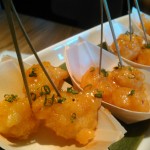 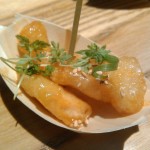 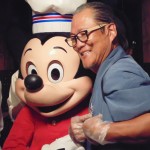 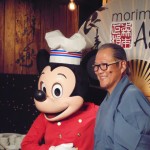 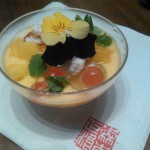 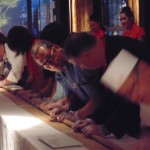 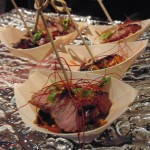 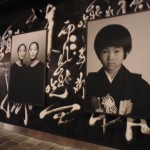 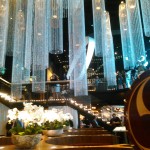 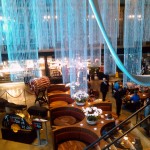 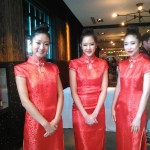 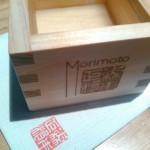 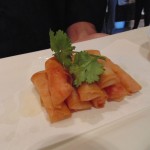 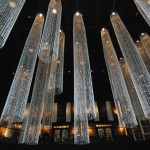 On my way out, I was struck by the beauty and design details that went into the exterior of the restaurant. The sides of the building feature Japanese lettering (I’m guessing) that at night are backlit so it looks like someone wrote a story on the building with light. Absolutely gorgeous!

I think Morimoto Asia will do well at Disney Springs, and I look forward to returning to try more off the menu. The restaurant is located at The Landing, and is open daily for dinner at 5pm. To make reservations, or to view full menus, visit morimotoasia.com.

Disclaimer: I was an invited guest of Morimoto Asia for the media preview. As always all opinions are honest, and fully my own.