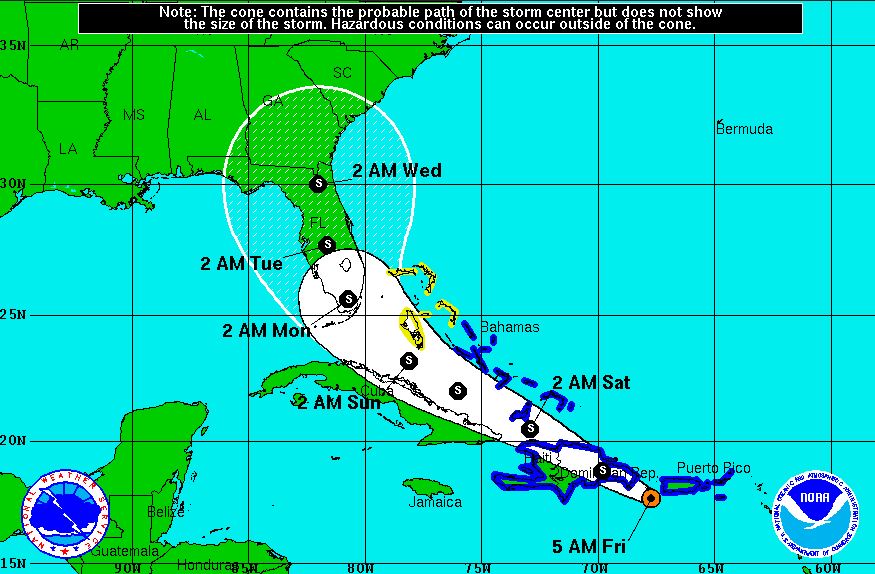 As of 5AM this morning Tropical Storm Erika has shifted its pattern back to the left with the Florida peninsula right in its sights. While the storm is not currently projected to reach Hurricane strength, these storms are un-predictable and individual clusters within the story can still produce heavy damaging rain, wind or even a tornado. So it’s important to be alert if you will be in Central Florida on vacation early next week.

In general, stay safe by staying indoors and away from windows. You might want to have some extra water and food inside your hotel room (snack bars or cereal you can eat without milk work well), enough to last 2-3 days. Make sure your phone has a full charge in case the power goes out. Follow the instructions of your hotel during the event and maybe ask ahead of time if they have common gathering area during the storm (often these are convention halls with no windows). Have your airline phone number on speed-dial in case there are closures or cancellations. Make sure you have some extra cash as ATM and credit card networks may be down after the storm.

Keep an eye on the NOAA National Hurricane Center or the local news for the latest changes to Erika’s strength and path. The potential impact of a tropical storm can still be significant and should not be taken lightly.

It’s been almost 10 years since Walt Disney World had to close or delay opening for its theme parks due to severe weather. In October 2005, Disney’s Animal Kingdom, Disney’s Hollywood Studios and the Water parks closed for cleanup after a glancing blow from Hurricane Wilma, while the Magic Kingdom and EPCOT were able to re-open later in the day.