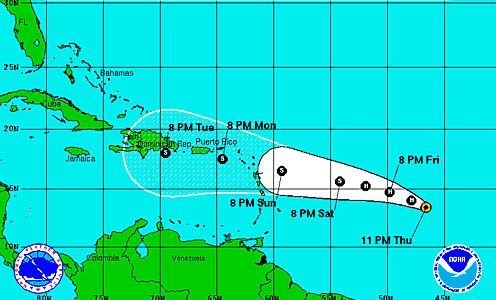 We’re more than a month into the 2015 Hurricane season and we finally have our first named hurricane on the season – Danny. The storm is still a ways off from any populated area and there’s no way to no if it will even hit the United States, let alone Orlando.

In general, if your travel to Disney is 7 days away or less, you may be able to reschedule or cancel your Walt Disney Travel Company Magic Your Way vacation package and most room only reservations (aka, travel booked through Disney) without any change fees.

For those who don’t live in Central Florida, it’s important to know that you shouldn’t take Hurricane warnings lightly. Even if the eye of the storm isn’t passing nearby, high winds and tornadoes are possible in any of the storm’s bands. Add to that the possibility of a lightning strike and staying properly sheltered during any heavy storm is a good idea.

If a tropical storm or hurricane does strike Disney, expect the company to place safety first. While they will attempt to stay open as late in the week as reasonable they have been known to close down the parks on storm days. When the parks have been cleaned up and declared safe they will reopen them as fast as they can.

The good news is that 2015 is forecast to be a light year as far as named storms and hurricanes. But it’s a good idea to be aware of your options if one does manage to make it to Central Florida.

Have you every visited Walt Disney World before or after a major storm? Do you have any tips for getting the most out of the vacation?