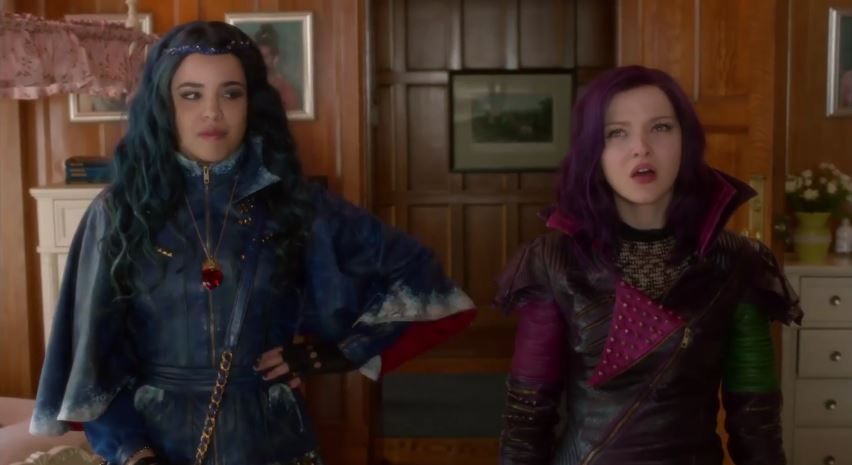 In the new Disney Channel Original Movie Disney’s “Descendants,” Dove Cameron, Cameron Boyce, Booboo Stewart and Sofia Carson star as the teenage sons and daughters of Disney’s most infamous villains. “Descendants” is live-action movie that – with a knowing wink at traditional fairy tales – fuses castles with classrooms to create a contemporary, music-driven story about the challenges in living up to parental and peer expectations.

The story, set in the idyllic kingdom of Auradon, playfully presents the possibilities of what happens after the “happily ever after.” As it unfolds, Ben, the benevolent teenage son of the King and Queen (Beast and Belle from “Beauty and the Beast”), is poised to take the throne. His first proclamation is to offer a chance at redemption to Mal, Evie, Carlos and Jay, the trouble-making offspring of Maleficent, the Evil Queen, Cruella de Vil and Jafar, who have all been sequestered on the forbidden Isle of the Lost for 20 years. These villainous descendants are allowed into Auradon for the first time to attend prep school alongside the teenage progeny of Fairy Godmother, Cinderella, Sleeping Beauty and Mulan. Only time will tell if these evil teens follow in the footsteps of their wicked parents.

As these sons and daughters of evil meet the children of goodness, their story incorporates empowering themes about self-confidence, finding the beauty within, freedom of choice, personal responsibility, teamwork, justice and empathy.

In this new short clip Evie and Mal check out their new fairy tale accommodations:

Will you be tuning in on June 31st?