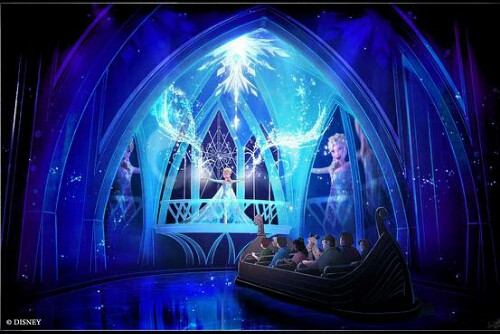 The Wall Street Journal (paywall) got an early peek at the Frozen themed attraction that is taking up residence in EPCOT’s Norway Pavilion. “Frozen Ever After” is a boat tour that takes you back into the story of the movie, but without retelling the whole film.

Instead, the ride takes place during the Winter Festival, which through the Elsa’s magic actually takes place in summer (a concept that I’m sure would be welcomed here in the heat of Orlando’s summers).

The ride will keep it’s existing path and boats, but replace everything else with Walt Disney Imagineering’s special blend of real world sets, advanced audio-animatronics, and digital projection. This also means the ride will keep its length of just under 4 minutes and a similar capacity as Maelstrom. So plan on getting those fastpasses or waiting in a long line.

Speaking of the queue, you will pass Wandering Oaken’s Trading Post, whose “Yoo-hoo!” will be heard as you go by. Once onboard the attraction, Olaf and the reindeer Sven will introduce riders to the “Frozen Ever After” festival theme.

The boats then take you thorugh Troll Valley, where you hear Grandpa Troll tell the story of how Anna and Kristof met, You then go up a ramp to a wintery ice skating scene with Olaf, Anna & Kristof singing along side of Sven. 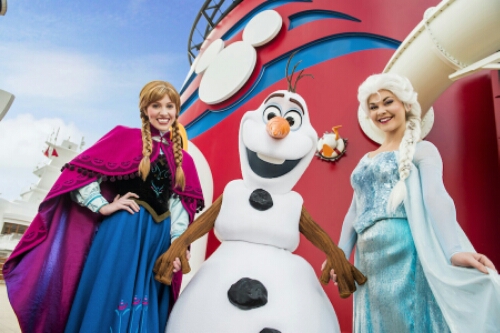 After that you enter the gates of Elsa’s Ice Castle where you see her on a balcony singing “Let it Go.” Expect big special ice crystal effects here.

Of course, Marshmallow, the giant snowman makes and appearance, and so do the smaller Snowgie creatures from the animated short “Frozen Fever.”

Academy Award winning composers Robert Lopez and Kristen Anderson-Lopez are providing new lyrics to spruce up familiar songs. No doubt your kids will be singing these songs over and over again just like with the movie.

It sounds like the advanced audio-animatronics will be similar to the new dwarfs in the Seven Dwarf Mine Train. Digital projection onto the faces make them capable of a much wider range of animation.

In addition to the new ride, there will be a newly built Elsa and Anna meet and greet located between Norway and Mexico pavilions.

While a Frozen attraction would be more suited to the Magic Kingdom, Disney is hoping it will help boost the relatively stagnate attendence at EPCOT. I’m one who believes that since Frozen is drawn on Norway’s rich Scandinavian culture and art, it will fit in fine. But it’s not my first preference for the pavilion.

Unfortunately, other than sometime next year, the article doesn’t give an opening date for the attraction, but I think it’s safe to say that Disney is proceeding as fast as they can to capitalize on Frozen fever.