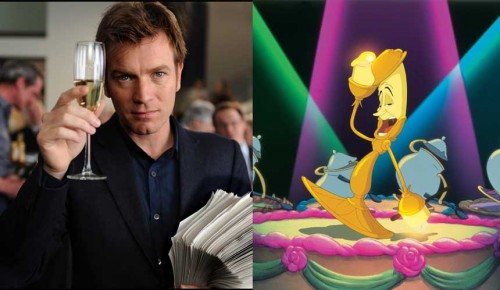 Ewan McGregor is known for playing a wide variety of roles in his acting career. From ghost writer to Jedi to Trainspotting drug addict, he’s played a wide variety, but until now, he’s never been cast as a talking Candlestick. I hope McGregor can sing as well as he can wield a light saber. “Be Our Guest” is a pretty big moment in the film.

Also added to the cast is Stanley Tucci who will be playing a new role created specifically for this production. Tucci will inhabit the role of Cadenza – the castle’s grand piano and something of a neurotic maestro.

Bill Condon is directing from a script by Evan Spiliotopoulous and Steve Chbosky. Alan Menken returns to update the music and maybe add a new song or two.

Beauty and the Beast will waltz into theaters on March 17, 2017.

Previously: A cast selfie and a letter from Ian McKellen.

previousFirst photo of Johnny Depp as Captain Jack Sparrow from Pirates 5.
nextDaredevil renewed for second season by Netflix and Marvel