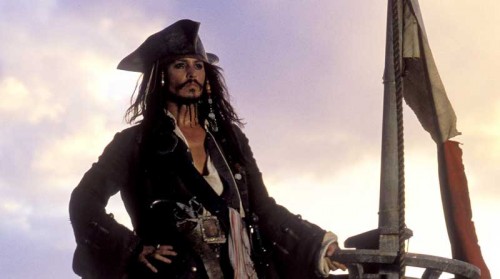 Somewhere on the golden coast of Australia, Jerry Bruckheimer is producing the 5th Pirates of the Caribbean movie starring Johnny Depp as Captain Jack Sparrow. As has become his tradition, Bruckheimer shares pictures from the set along the way, including the occasional glimpse of Captain Jack.

And indeed, Depp has returned down under to work on the “Pirates of the Caribbean: Dead Men Tell No Tales” after having to travel back to the states for treatment on a hand injury he sustained during rehearsals.

The plot of the film takes Depp’s Captain Jack on a search for the legendary trident of Poseidon. Of course, not everything goes as planned:

Captain Jack is back and we’re not letting him go. pic.twitter.com/m6VVRTyFQm

“Pirates of the Caribbean: Dead Men Tell No Tales” is scheduled to make off with its bounty at theater near you beginning July 7, 2017.