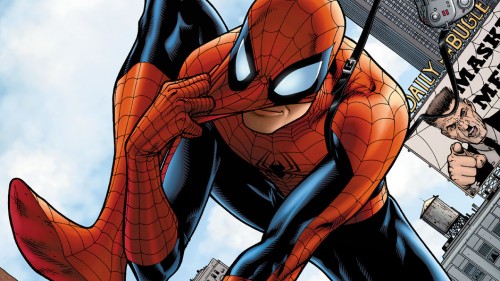 Marvel is finally starting to let us know what kind of Spider-Man they’ll be introducing into their Cinematic Universe. In an interview with Collider, Kevin Feige, the man overseeing everything in the MCU, confirmed that we will be seeing Peter Parker alongside the Avengers (as opposed to someone like Miles Morales who is Spider-Man in the Ultimate line of comics) and that they want him to still be in high school.

“We want to play with Spider-Man in the high school years because frankly there’ve been five Spider-Man films and the amazing thing about it is, even though there’ve been five Spider-Man films, there are so many things from the comics that haven’t been done yet. Not just characters or villains or supporting characters, but sides to his character. The most obvious being the ‘young, doesn’t quite fit in’ kid before his powers, and then the fella that puts on a mask and swings around and fights bad guys and doesn’t shut up, which is something we want to play with and we’re excited about.” said Feige.

But that’s not all we’ve learned about the Web-head. Crave Online interviewed Feige as well and they asked him the question on everyone’s mind, “Are we getting a third origin story for Spider-Man?”

“There is a young kid running around New York City in a homemade version of the Spider-Man costume in the MCU, you just don’t know it yet… In Spider-Man’s very specific case, where there have been two retellings of that origin in the last whatever it’s been [thirteen years] for us we are going to take it for granted that people know that, and the specifics.”

And this, True Believers, is why I continue to love what they’re doing at Marvel Studios. They are accepting that we already know Spider-Man’s origin story so that we don’t get a third version of the same movie. I’m also really intrigued at the idea of a “homemade” Spider-Man suit. Of course, Peter makes all of his suits, but the wording makes it sound less refined than his normal attire. Feige actually spoke some about the new Spidey suit as well.

“We’ve already designed the costume, which is different than any of the ones that have come before. And yet ours is classic Spidey, as I think you’ll see.”

The comment about the homemade suit and that the costume will be different that any we’ve seen so far makes me wonder if we will get to see the Iron Spider suit that Tony built for Spider-Man right before the Civil War in the comics. It fits with what they’re moving towards in the movies. And, as we’ve seen in a recent Age of Ultron trailer, Tony’s not the boss but he does pay for everything, design everything and make everybody look cooler.