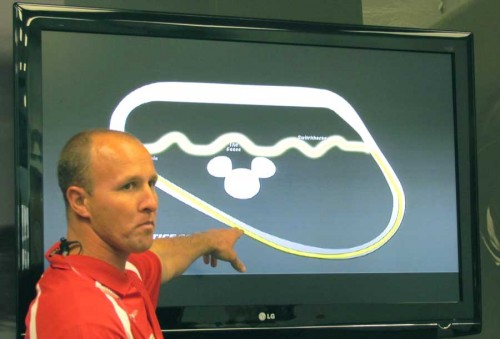 FHP and OSHA investigators have additional insights based off the in-car camera that filmed the crash. While the video hasn’t been released to the public, it shows both a view of the driver and passenger inside the car, and a forward facing view looking out of the car.

According to the FHP, the video shows the instructor, victim Gary Terry, reaching over to take control of the steering wheel from the driver attempting to correct the car as it went into a spin. Both driver and passenger were wearing helmets and restrained with an over the shoulder seat-belt. The car was going about about 100 mph at the time of the accident. Due to the nature of the impact with the guard rail, the instructor was killed instantly.

The investigation will look at if the safety features of the track were suitable for the reverse direction circulation used by the Exotic Driving Experience. It looks like the guard rail the car impacted was at a high speed portion of the track and not protected by tires or a curve that would prevent impalement injuries like the passenger suffered.

Update: Race car driver and coach Jon Lee Miller has written a must read piece about the fatal accident. Miller illustrates the point I make above about how dangerous it is to drive in the wrong direction on a track. Frustratingly, it’s likely a $300 investment in track improvements could have saved a life here. We’ll know more when the investigation is complete, but meanwhile, I urge all similar facilities to get on board with safety improvements and drivers and teams should insist on postponing races at unsafe locations.

It is also reported that the driver of the car, 24-year-old TaVon Waton, was a cast member at a Walt Disney World resort enjoying a birthday present his wife had gotten him. The laps in the white Lamborghini was his 2nd car of the day.

Since the incident took place on a private course, Watson won’t face charges in the accident. The Walt Disney World Speedway is currently closed for the investigation.

In following the news coverage, it’s interesting how many people associate the two Walt Disney World Speedway driving experiences as a Disney attraction, when really it’s a 3rd party operator and it’s not actually in a theme park. Regardless, the Disney reputation has suffered a bit from the incident.

That is the danger Disney faces by inviting 3rd party operators like Richard Petty Driving Experience to the resort (or even trash or valet services). Guests don’t always understand the difference between the Speedway and a theme park attraction or a 3rd party vendor and Disney. You have to wonder if Disney will let the Speedway re-open at this point.

When I think back to the avoidable tragic death of a Monorail cast member in 2009, Disney World took a well-deserved hit in public perception for that. Still, no one was calling for the Monorail to close.

What makes this different is that the Speedway was scheduled to close for good on August 9th of this year. Does it make sense to reopen either the Exotic Driving Experience or the NASCAR themed Richard Petty Driving Experience? What do you think?

Update: a GoFundMe fundraiser has been setup to help the family of Gary Terry cover funeral expenses and care for their future