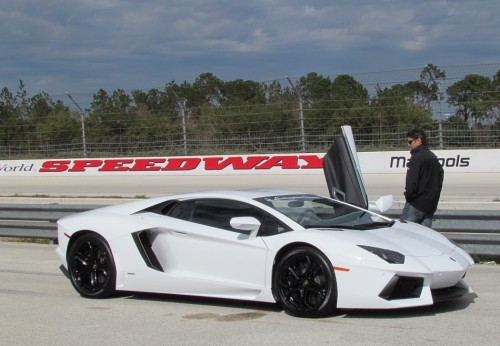 The FHP reports that the 36-year-old victim was involved in an accident while a passenger in an exotic Lamborghini sports car as part of the Exotic Driving Experience. The car’s driver was transported to Celebration Hospital with injuries. According to the Highway Patrol, the driver failed to navigate the course and crashed into a guardrail on the passenger’s side.

During the Exotic Driving Experience, the guest can drive while an instructor ride’s in the passenger side or the guest can ride as the passenger. It has not been announced at this time how the ride was configured at the time of the accident.

Update: 11pm We can now confirm the passenger in the exotic car was Gary Terry, an long time employee of Richard Petty Driving Experience and Exotic Driving Experience who identified himself online as Senior Operations Manager at Walt Disney World Speedway, and lived in Davenport, FL. During the Exotic Driving Experience an employee sits in the passenger seat beside the guest. This employee has the ability to reduce the car’s power if they feel it’s going too fast or the driver is out of control, but they don’t otherwise control the car. The driver was identified as 24-year-old Tavon Watson of Kissimmee.

On behalf of everyone in the organization, it is with a very heavy heart that we extend our deepest sympathies to those involved in today’s tragic accident in Orlando. Florida Highway Patrol is currently investigating the incident.

A spokesperson for Walt Disney World has provided the following statement:

We offer our deepest sympathy to those involved in today’s tragic accident.

In 2008, a 60-year-old amateur driver was killed at the Daytona Beach version of the Richard Petty Driving Experience. He had a heart attack on track and crashed into a wall.

Our thoughts go out to the victim’s family and everyone on the scene.

This is a developing story. This post will be updated as warranted.