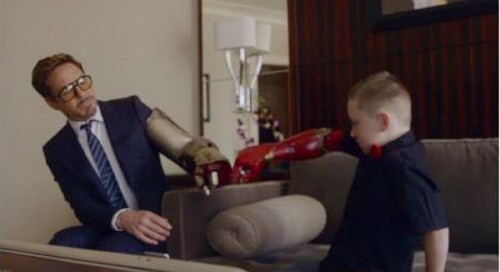 The Avengers team has been in the news a lot lately because the new Avengers sequel, Age of Ultron, is coming to theatres on May 1, 2015. Despite the amazing movies, and immense talent these heroes bring they bring even more amazingness off screen. Yesterday Robert Downey Jr. sent out a tweet with a very touching video. Robert Downey Jr., otherwise know by his alter ego Tony Stark, or his alter alter ego Iron Man, met with a very special boy to give him the ultimate gift.

The video is only 2 minutes and 19 seconds long but filled to the brim with all the feels. The video starts with Alex who is a seven-year old boy and born with a partially developed right arm. Alex is a big superhero fan like many of us and we see him walking curiously down a hallway in his adorable red bowtie. What Alex does not know is that Albert Manero, a college student who builds and donates low cost, 3D-printed bionic limbs to kids around the world.

For the last 2 weeks Albert had been asking for support as part of the #CollectiveProject. The video continues to Alex meeting Tony Stark with the biggest shy, gleeful smile. Now in the video you see Stark opening 2 boxes with Iron Man gauntlets in them. But look closely and you will see the boxes say Stark Industries, props on the details guys! Now you have to give Robert/Tony some major points because he explains that often his designs fail, but it’s important to keep trying. This statement is something that should resonate with everyone. All heroes are measured more by how they react to failure than by their accomplishments. I’m sure Alex will become quote the superhero that could even give Director Fury a run for his money.

Now I would like to take a moment to talk about The Collective Project a little and get people aware of the amazing things they do for people like Alex. Here is aquote from their site “The #CollectiveProject is about harnessing the power of the many to bring great ideas to life. Follow us as we shine a light on the stories of these students who are making positive changes for their communities.” Albert Manero is just one of many people doing amazing things to help others. Find out what you can do to get involved here:

Thank you to all of our superheroes whether its from the Avengers visiting Children’s Hospitals, thanks Star Lord and Captain America, or everyday heroes making a change in the world. I salute you and keep up that amazing work!