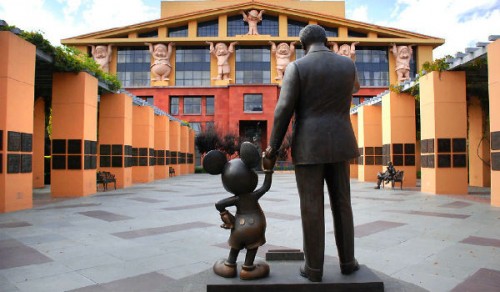 We’re sad to report architect Michael Graves has passed away at age 80. He had been paralyzed from the chest down as a result of a spinal cord infection since 2003.

We are reporting on it because Graves lent his whimsical style to several Disney buildings, and other Disney products.

He was the creative mind behind the design of the Team Disney Building in Burbank. The Parthenon-inspired facade features the dwarves from Snow White as pillars because of him.

Graves went on to design the Walt Disney World Swan and Dolphin resorts, as well as Disney’s Hotel New York at Disneyland Paris. He even designed some items for Disney Consumer Products, including housewares, bookends, and watches.

In fact, Michael Graves was one of the first outside designers granted “artistic freedom” to use Disney characters outside of their character integrity guidelines.

Graves also worked on many non-Disney buildings, including what many consider the first post-modern building in Portland, OR, most recently the Resorts World Sentosa in Singapore, as well as houseware designs for Target, JC Penny, and more.

A sampling of his many designs can be viewed at michaelgraves.com.