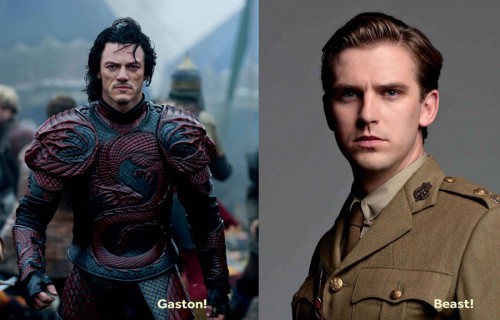 I just saw the new live action retelling of Disney’s Cinderella last night. Sadly, I’m embargoed from reviewing it until much closer to it’s March 13th opening, but I can tell you that it was a charming, sumptuously costumed, and sweetly told fairytale for a new generation. It revisits the story just enough to make it relevant for modern audiences.

Part of what made Disney’s Beauty & the Beast so attractive to modern audiences is that agency it gave its heroine. That was new and refreshing at the time and Belle became a role model for many young girls (and boys) who learned that smarts was attractive and being kind to others, even if they disgust you, was cool.

We could definitely use more of that message these days, so I’m looking forward to Disney remaking Beauty & the Beast as a live action film. We learned earlier that Emma Watson will play Belle and we now know who will join her as Beast and Gaston.

Fans of Downton Abbey will recognize Dan Stevens. He will play Beast. Those who enjoy the recent Hobbit movies will recognize Luke Evans who has been cast as Gaston. Both bring some international flair and accents to the roles and a considerable dash of handsomeness.

What do you think of these choices?