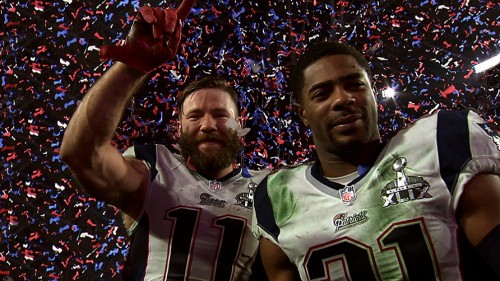 It’s true, the butler did it. Malcolm Butler’s goal line interception sealed the game for the New England Patriots and wide receiver Julian Edelman’s 109 receiving yards on 9 catches helped lead the team to a Super Bowl XLIX championship. Now the pair will be celebrated in victory parade at Disneyland on Monday February 2nd.

As part of the “What’s Next” campaign, the pair also recorded a commercial for Disney parks uttering those classic words, “We’re going to Disneyland!” This is the 48th edition (over 28 years) of the famous ad series. It began in 1987 when New York Giants quarterback Phil Simms first shouted the line after winning Super Bowl XXI.

It’s a bit odd that Super Bowl MVP Tom Brady isn’t the one being feted with a Disney parks commercial and victory parade, but Disney does reserve this campaign for the real heroes of the game and its hard to deny that title to Julian Edelman and Malcolm Butler. The last time two players visited a Disney park after winning the NFL championship was 2009, when Santonio Holmes and Ben Roethlisberger led the Pittsburgh Steelers to victory in Super Bowl XLIII.

Update: pictures and video from the Victory Parade for Edelman & Butler at Disneyland.