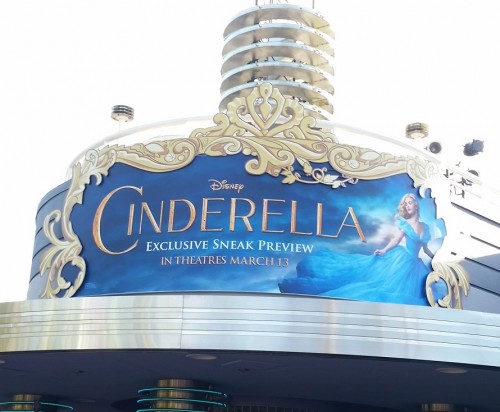 As we announced last week, Disney’s Hollywood Studios is currently hosting a special sneak preview of Walt Disney Studios “Cinderella.” Now through March 21st visit the ABC Sound Studio for shows that begin every 30 minutes. Also, beginning Feb 1 and running through April 11th, the actual golden coach from the movie will be available for photos on the Streets of America. 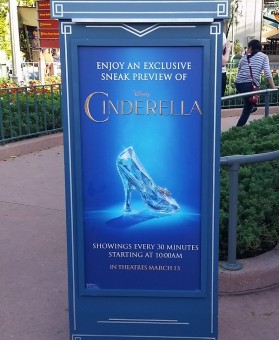 That golden coach features prominently in the approximately 10 minute selection from the movie. You’ll see assorted clips, rather than one long sequence, but the longest segment focuses largely on Cinderella’s desire to go to the ball, including the evil stepmother and stepsister’s destruction of her gown to the appearance of Ella’s Fairy Godmother and the transformation of both coach and dress.

The movie will have to strike an interesting balance. Since this isn’t a retelling a la “Maleficent,” the audience knows the story. Because of that it will be the details and the performances that make this movie work. The preview seems to indicate the movie is on the right path in that regard.

The set design, costumes and props are all so beautifully done they eat up all your attention. My biggest complaint with the preview is unfair, for how could real life ever compare to Marc Davis’ beautiful animation in the transformation scene from Walt Disney’s classic animated feature.

That said, even the naysayer in our group left the preview excited to see the full movie when it hits theaters on March 13, 2015.