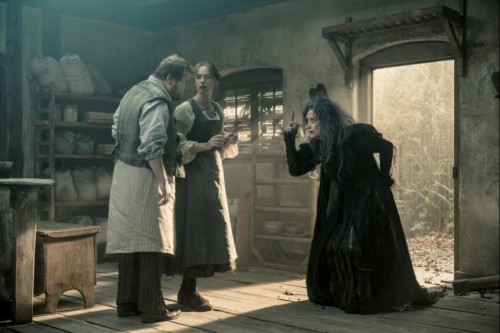 The baker and his wife meet the witch

Chicago won an Oscar for best picture in 2003 and before that it was last awarded 34 years prior, in 1968, to Oliver! From it’s Broadway run in 1987, Into the Woods already has a bevy of Tony’s in its closet, could an Oscar be in its future?

Pete Hammond, Deadline Hollywood’s Awards Columnist, shares his love of the material and his reaction after having seen the new movie. He can’t give it a review, but he does handicap its chances this awards season.

Streep is obviously the strong bet here and she’s a cinch to land her incredible 19th Oscar nomination, this time in supporting for her wicked(ly) funny and multidimensional witch.

Pine and Kendrick are standouts too. There can be no question the film will land nominations for Colleen Atwood’s costumes and Dennis Gassner’s production design, the makeup and hair styling and possibly Dion Beebe’s cinematography.

It’s a great article, well researched (I had forgotten that Sondheim had won an Oscar for Disney’s Dick Tracy), and easy to read, even for a non-musical buff. Sondheim won’t get a repeat chance at an Oscar here, as the only original song he wrote was cut from the final version of the film. But there is a real chance that it will at least earn a Best Picture nod. That would be gerat.

My biggest concern for Into the Woods is the box office competition. Not only are 5 other films opening on December 25, the updated film version of Annie (which will compete for families with pre-tweens) opens a few days earlier. It’s a lot to ask for at the end of 2014, a notoriously bad box office year.