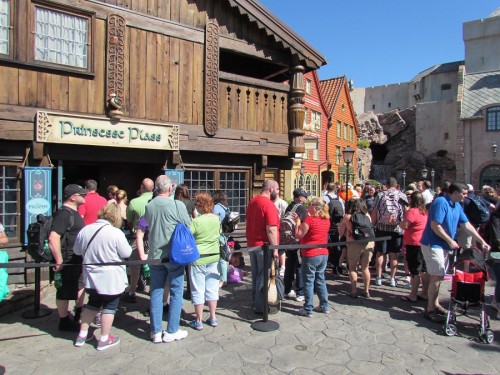 Remember the long lines for the Princess Plass meet and greet with Disney “Frozen” sisters Elsa and Anna in EPCOT’s Norway  pavilion? At times the queue was 5+ hours long to see Disney’s latest stars. Have you explored the “Norsk Kultur: inspiration for Disney Frozen” exhibit inside the Stave Church? It’s not much, but it’s the perfect exhibit to show how the movie and the pavilion are inextricably linked.

The movie obviously drew a lot of its inspiration from Norway, but was set in the fictional kingdom of Arendelle. Fictional, because that’s what fairytales do, they use fantasy to shine a light on reality.

With Friday’s announcement, it’s official; Disney is planning to replace Maelstrom with a Disney Frozen themed attraction. The issue, has sharply divided fans. While Norway pavilion wasn’t my first choice for a Frozen attraction (I think it would fit better in Magic Kingdom with the other animated princesses), I’m not opposed to a movie that is so obviously Nordic inspired being placed in Norway.

One of the arguments I’m hearing against adding Frozen to the World Showcase is that cartoons aren’t realistic enough for a theme park that is supposed to represent various nations. The whole cartoons ruin EPCOT World Showcase thing just hasn’t shown to be true. The world didn’t end when Donald and pals appeared in Mexico and having Belle & Aurora walk-arounds hasn’t destroyed France. In fact, I’m pretty sure that if this announcement was for a Ratatouille attraction, like just opened in Disney Studios France, the fans would be 90% in favor of it.

Stories are central to a nation’s culture. Disney has always been famous for incorporating those stories into its animation litany. Maelstrom, as it exists today, incorporates many of that nation’s myths. So too will the Frozen attraction, just one lens removed. The Disney lens, but you can still see Norway through it.

Here’s the best reason for the change, worse than France or Mexico, the country of Norway has not been paying for pavilion maintenance or upgrades for some time. It does not have a strong restaurant to anchor it (it’s filled with other Disney princesses) and frankly, when is the last time you stopped and watched that 7 minute movie at the end of Maelstrom. They don’t even bother to close the doors any more.

“Frozen” will bring life back to a pavilion that has been neglected to the point where the only thing that still resembled Norway were the Lefse in the bakery. I realize this is not a popular position. It if turns Disney’s attention back to rest of the World Showcase and maybe gets us a new country or a Ratatouille attraction in France, then it’s a terrific move. EPCOT hasn’t been living up to its potential and it’s time to move forward with new ideas and new life for the park.

previousSave 50% on Disney Frozen Wall Decals, Plus Many More
nextKelcie and Larry get married at Disneyland