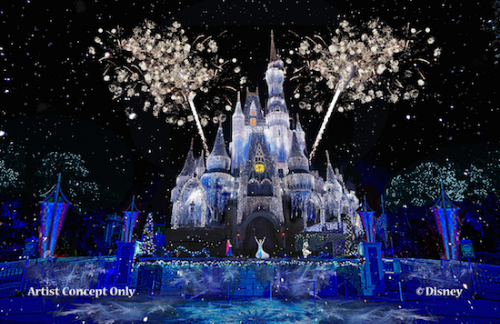 Walt Disney World has just officially announced that a new “Frozen” attraction will be coming to the Norway pavilion at EPCOT. The ride will take guests to Arendelle and take them through their favorite moments and music from the hit film. The new attraction will replace the boat ride “Maelstrom.”

Additionally, Anna & Elsa will make their homes in Norway with a royal meet and greet location in the pavilion that inspired the film.

Disney has also announced that the characters from “Frozen” will continue to have a big presence in the parks during the holiday season. Queen Elsa will take over duties from the Fairy Godmother and transform Cinderella castle into a Frozen ice palace nightly starting in early November. Also Anna, Elsa, Kristoff, and Oloaf will be added to “Mickey’s Onnce Upon a Christmastime Parade.”

I think it’s safe to say that pretty much everyone expected this. But it’s nice to officially have the news. The last day to ride Maelstrom will be October 5th.

This story will be updated with further information as it comes in.

What do you think of the big announcement.