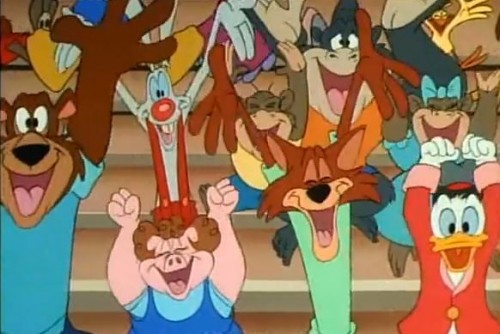 Yesterday we saw some Disney animation test footage with an early rendition of Roger Rabbit before he became the Roger Rabbit we all know and love from the movie. We also, completely coincidentally, watched the opening of Ducktales remade with real ducks. But did you know that the early version of Roger Rabbit played a part in the eventual launch of the Ducktales cartoon?

In 1987, a year before “Who Framed Roger Rabbit” opened in theaters, the early Roger character, made a cameo as a soccer fan in the stands of a special Disney animated short “Sports Goofy in Soccermania.” It first aired on NBC as part of the 1-hour special “An All-New Adventure of Disney’s Sport Goofy,” the first new Goofy cartoon from Disney since 1965.

Watch out for Roger around minute 11:30.

Set in Duckburg the short features many of the characters that would later appear in DuckTales. This short was sort of a pilot to see if the characters would work well. Also, the animals on the ‘Greenbacks’ should look familiar to anyone who has seen Disney’s Bedknobs and Broomsticks.

Another cool bit of trivia from that episode was the appearance of Lakers long time announcer Chick Hearn as the play by play announcer for the soccer match. Joe Ranft, who later went on to become one of the original core members of Pixar’s story brain trust, was also involved in the making of the short.

Disney is famous for reusing characters and poses in its animation. But this has to be one of the most obscure examples of that.