Why the Disneyland Corndog is so beloved by guests 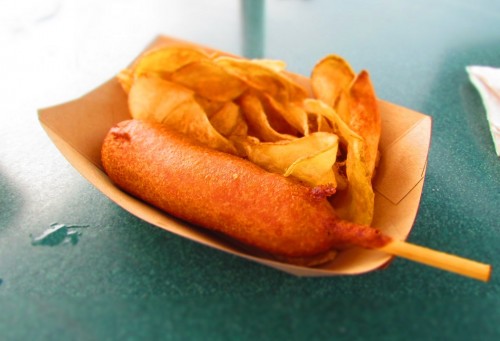 Last month we finally sampled the Disneyland Corndog that has be replicated for east coast patrons out of the Fantasy Faire food truck at Downtown Disney. The verdict was that it was a very close approximation of the real thing. Thanks to our friends at TouringPlans.com we now have some inside knowledge as to why the Disneyland Corndog is so beloved by guests.

This video was filmed back in 2010, before Cars Land construction began, but it has some great information on the world famous Disneyland Corndog. Plus, you also get to listen to Gary Maggetti, Disneyland’s Food and Beverage Director, speak. He has a voice for radio. Seriously, a more melodious Disneyland interview I have never heard:

Disneyland’s hand-dipped corndogs are currently available in only four locations around the world. Two inside Disneyland itself (The Little Red Wagon on Main Street and the Stage Door Cafe at the Golden Horseshoe), the Corndog Castle in Paradise Pier, and the Fantasy Faire food truck in Downtown Disney. The Corndog Castle has different flavored dogs (a hot link and cheddar cheese) you can sample. But I recommend sticking with the original.

Much more at on the history of the Disneyland Corndog at TouringPlans.com.