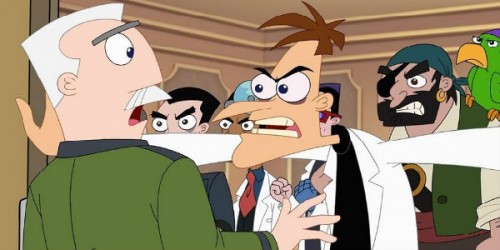 Leno plays the voice of Major Monogram’s boss, Colonel Contraction of the O.W.C.A. (Organization Without a Cool Acronym), in the special episode in which Phineas, Ferb and the gang host a global summer concert – just as Doofenshmirtz’s latest “-inator” invention moves the Earth, putting summer itself in jeopardy.

The episode ushers in several new episodes of the Emmy Award-winning series airing throughout the summer, which will include notable guest stars Jon Stewart (“The Daily Show with Jon Stewart”), Elizabeth Banks (“The Hunger Games”), and Simon Pegg (“Star Trek: Into Darkness”).

Also set to premier in July is “Phineas and Ferb: Star Wars.” A sneak peek of this special highly anticipated episode is currently airing at Star Wars Weekends at Disney’s Hollywood Studios. No exact date has been given for the broadcast airing.