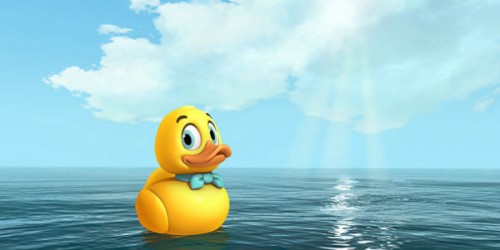 The story introduces an unflappable rubber ducky with a broken squeaker named Lucky (voiced by Borle) and two kindred spirits – an extroverted hippo with mismatched eyes named Flo (voiced by Hilty), and a timid turtle named Snap (voiced by Cavanagh) – as they find themselves stranded at sea when the cargo ship they are being transported on is caught in a storm. This trio of misfit tub toys just wants to find kids who will love them as they are, proceed on a grand sea adventure.

Showcasing its musical theater cast, “Lucky Duck” features six original songs, including the ballad “I’m a Lucky Duck,” the up-tempo “Tub Toy Twist,” and the heartfelt “Friends Will See You Through.”

Geared towards kids age 2-7, “Lucky Duck” premieres Friday, June 20 on Disney Junior at 7pm (ET/PT), and will re-broadcast Saturday, June 21 on The Disney Channel at 9am (ET/PT).