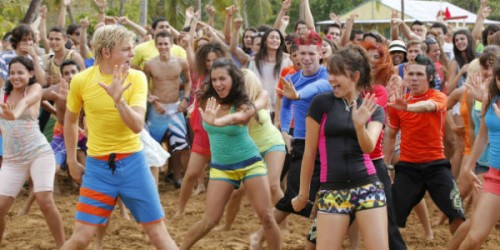 Time to put on the sunscreen and get ready to sing and dance! The Disney Channel has announced it will begin production in July on the sequel to “Teen Beach Movie.”

The Disney Channel Original Movie ranks as cable TV’s all-time #2 movie in total viewers, and its soundtrack hit #1 on the Billboard charts.

The sequel will follow the setup teased in the final scenes of “Teen Beach Movie,” as modern day teens Mack and Brady get a real world visit from Lela, Tanner, Butchy, and other pals from the beach party pic within a pic, “Wet Side Story.”

Director Jeffrey Hornaday, who helmed and choreographed the first film, will also return for this sequel.

“Teen Beach Movie 2” is set to premiere on The Disney Channel in 2015.

previousMarvel Sets DVD Release for Agents of SHIELD and Captain America: The Winter Soldier
nextJay Leno to Guest on Phineas and Ferb Save Summer on Disney XD