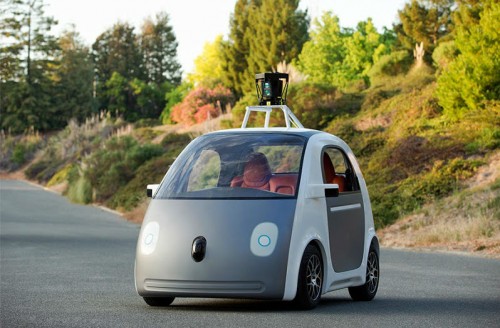 I’ve been a proponent of Google’s self-driving cars since I first heard about them 5 years ago. Like the folks at Google, I see a much safer and environmentally friendly future where cars are just a service you subscribe to and use on-demand.

Google has learned a tremendous amount about what it takes to create a self-driving car, but they admit there is still a ways to go before they are ready to become as ubiquitous as everyday cars are.

That said, Google sees an intermediary step that I think meshes perfectly with the needs of Walt Disney World.

That step debuted this week in a parking lot in Mountain View, CA. It’s a custom car built by Google but missing three of the usual things you would expect in a car – a steering wheel, accelerator pedal, and a brake. Instead three is a ‘start’ button, a computer dashboard to enter a destination or route, and a panic button in case you absolutely have to stop.

If you ask me, once you get past the clown car feel, it looks like a two person pod car, or something akin to Walt Disney’s original vision for the Peoplemover in EPCOT (this is EPCOT concept art by Herb Ryman).

The new Google Self-Driving Car is meant for urban uses where speeds are limited to 35 mph or less (crash damage is a lot less severe at 25 mph than at 50). Think Celebration, FL where NEVs are already allowed on streets.

But would work at Walt Disney World too. To help solve some transportation issues and bring back some of the transportation vision they used to be known for at a relatively affordable price, all it would take is a 4 or 6 passenger version of the car Google just demoed.

Start by partnering with Google to build an attraction at EPCOT, then when there are enough cars and a proven accident free system, expand to a dedicated road between DAK, DHS, and EPCOT.Slowly start to loop in hotels, water parks, etc, until you essentially have a peoplemover track that covers the whole resort, but you can go point to point in your Google car and don’t have to stop at every station along the way.

When the technology becomes more accepted, expand use to public roads that have a speed limit of 35MPH or lower (which, in theory could be all the roads except for Osceola Parkway and World Drive).

Google should get behind this idea because the attraction gives them a way to expose their idea to the general public and Walt Disney World needs it to help solve some transportation issues that come with adding so many new hotel rooms and no new roads.

What do you think? Would you trade your car for a self driving car? Would you prefer a car that takes you directly where you want to go without any stops in between like a fixed track people mover or bus system would?