In the past we’ve done our share of speculation for how Disney World could fix its transportation woes. What if I told you there was a solution that would cost the resort less than $50 million to build. That’s about half the cost of the average E-ticket these days. Get ready, because the solution is going to seem so obvious giving Disney’s theme park history.

A design group out of Austin, TX took on the challenge of revolutionizing mass transit for the city. Light rail, the cheapest of fixed railway options, costs round $35 million a mile to build, monorails can cost 2-4 times that, and don’t even bother suggesting a subway at over $400 million a mile, plus it would never work in Central Florida. But while vacationing in the mountains, they hit upon an idea that would cost between $3 and $12 million a mile. Even building a regular road can cost more than $3 million a mile. So that’s really affordable. 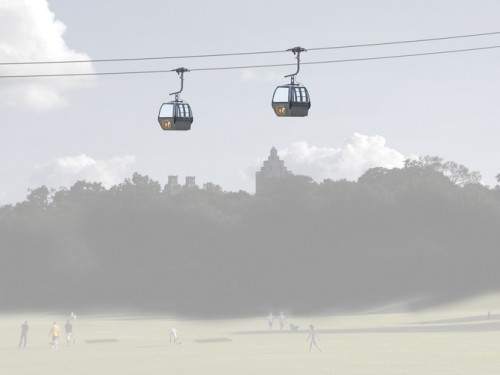 The solution is a network of gondolas. To long time Disney parks fans this will sound familiar. After all the Skyway attraction was a favorite way of crossing both Disneyland and the Magic Kingdom for years. They have the advantage of a high capacity moving over 10,000 people an hour, you can string them just about anywhere, they operate above the street grade meaning there are no issues with blocked traffic, and they provide guests with a scenic view while still getting them to their destination via the most direct route. Like high-end ski resorts, the gondola would be enclosed and, due to the magic of solar power, could have music and air conditioning too.

Here’s the designer’s presentation. Gondola’s are already a part of transportation systems in a few cities. It’s very easy to see how this would work for Disney World with it’s own hub and spoke model.

Update: the original presentation is gone, but here’s a similar video:

Based on the ideas in that video here is what a hub and spoke model might look like at Walt Disney World. Of course a real study would consider sight lines and land management issues, but you get the idea. 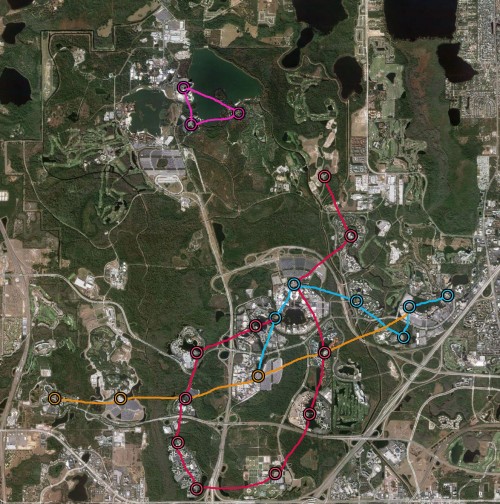 Each line is independent and bi-directional and transfer stations would be where ever the lines intersect. I would suggest building them in this order: Blue, Gold, Red, Maroon. There’s no need for a link between EPCOT and the TTC since the monorail already serves this purpose. At some point in the future, I could see a line between DAK and the MK, especially if the 5th gate gets build in the middle there.

So what do you think? Would you ride a gondola instead of the bus? Btw, this would also seem to be an excellent solution for Disneyland, remote parking, and the Anaheim Resort. Especially when that third gate is announced.

Latest: Disney actually built a gondola network, they call it the Disney Skyliner. It opened in 2019 and has changed the way we get from Hollywood Studios to EPCOT for good.

previousNew Still from The Blue Umbrella
nextCastle 5-10: Significant Others