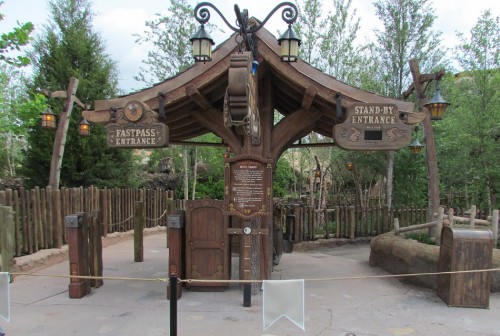 One last Seven Dwarfs Mine Train mini-update before the big media preview later today. Work on last minute details continued yesterday and, although a few hopefuls waited it out, there were no soft openings in the offing. As for when it might open to the public, I’m hearing two stories. From one camp comes the assertion that the roller coaster will be open to guests as soon as Friday evening or perhaps this Saturday morning. From the other camp comes the worrying report that the test and adjust phase continues as they work on making the cars themselves work a little better on the attraction and deal with problems with the audio-animatronics in the show scenes.

They also have to do some work installing a permanent sprinkler system meant to run during nightly fireworks as Snow White’s Mountain exists inside the fallout zone. The question is, can the open to guests with the temporary system in place now or will they have to wait until the final system is installed?

As the big media preview commences today, you might want to go back in time to watch Seven Dwarfs Mine Train come to life via the 20+ videos assembled in our New Fantasyland Playlist on YouTube. Below are a few more photos taken from around Snow White’s mountain yesterday. 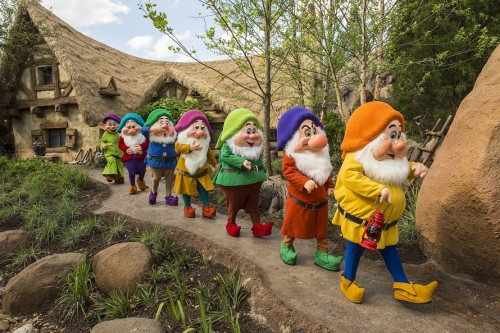 The final section of wall has come down at last to reveal, the cast member entrance to the attraction down that hall. A temporary stage has been erected for the Media preview event today and ribbon cutting tomorrow. 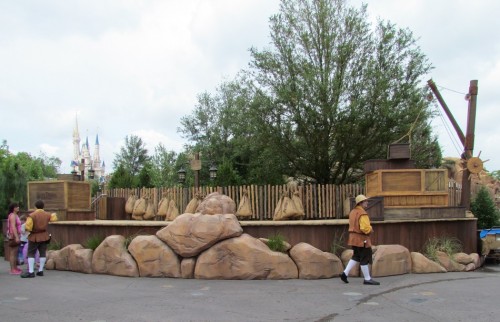 One more look at the completed Snow White Mountain. If you didn’t know to look past the forest and the trees, you may not realize there is an attraction there…. until you hear the screams of happy kids on the coaster. 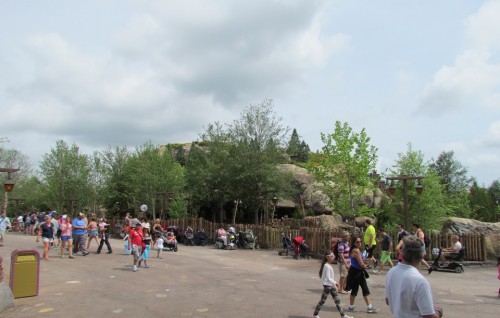 The collection of loot given to media as we checked in today. 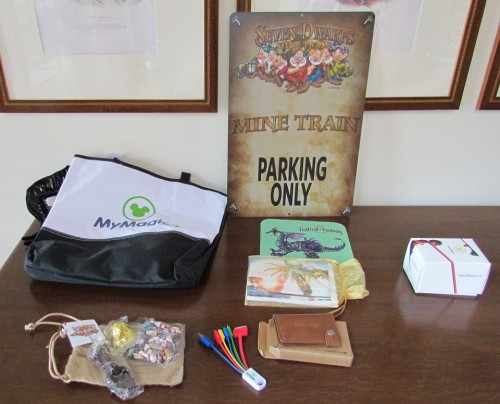 Including this special MagicBand available exclusively to guests of the event. 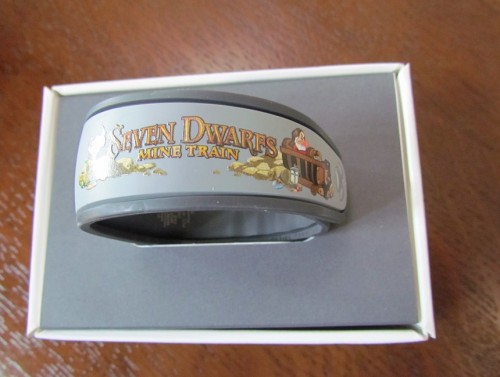 More details on Seven Dwarfs Mine Train from the brand new press release below:

The lovable world of Sleepy, Doc, Grumpy, Bashful, Sneezy, Happy and Dopey comes excitingly to life in spring 2014 when the Seven Dwarfs Mine Train takes New Fantasyland guests on a rollicking, musical adventure into the mine “where a million diamonds shine.”

The “crowning jewel” of New Fantasyland, the Seven Dwarfs Mine Train represents the completion of the largest expansion in Magic Kingdom history. The family-style coaster features first-of-its-kind ride vehicles that swing back and forth during the ride. Adding to the fun, the journey will be accompanied by music from the film classic and scenes filled with Snow White, the Seven Dwarfs and playful forest critters.

Inspired by the Disney animated film classic “Snow White and the Seven Dwarfs,” the story begins as guests cross a stone bridge and walk through a beautiful forest with the Dwarfs’ cottage in the distance. Then, they step into the attraction entrance and into the timeless story of the radiant and kindhearted Snow White and her forest friends led by the lovable Dwarfs.

When designing the cottage, Walt Disney Imagineers – the creative team behind all the attractions at Disney Parks – referenced the film in order to plan details as intricate as the color combination of roof shingles, the slope of the roof’s eaves, the shape of a lantern, and especially the etched woodland creatures that decorate the house. Props – including lanterns, ropes, pulleys and buckets of shiny jewels – were inspired by items found in the mine scenes of the film. According to Walt Disney Imagineering, jewels appear throughout the mine in four different sizes and in six different colors: red, green, amber, purple, blue and clear.

After passing through an interactive pre-show area with fun activities themed to mining – such as washing and sorting gems – guests will proceed to the mine train. Picks, shovels, barrels and hoists are scattered throughout the queue tunnel and at the load-in area.

Guests board the specially-designed mine cars and launch into their journey through the mine. Each “train” consists of five mine cars, which seat four guests each. The individual mine cars are designed to reflect similar vehicles that appear in the film, hand-made of wood by the Dwarfs, shaped by an axe, and used to haul rocks and jewels.

As guests twist and turn through the mine, the cars rock back and forth, adding an extra family-friendly thrill element. Riders tour through the cavernous mine’s winding track – jutting outside to climb and dip through the wooded landscape, and then re-entering the mine at different points in the attraction.

As with any classic Disney “dark ride,” the Seven Dwarfs Mine Train features spectacular Audio-Animatronics – with cars slowing down so guests can spot favorite characters making an appearance in different scenes.