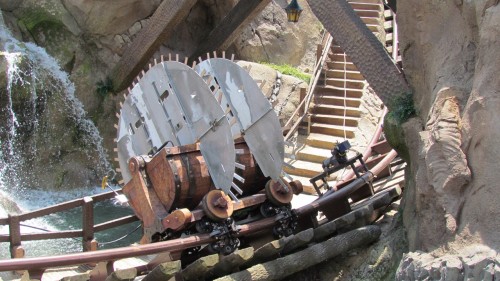 After years of work, the last piece of New Fantasyland is about to fall into place with the ribbon cutting ceremony for Seven Dwarfs Mine Train roller coaster later this week. Workers are still buzzing around the track taking care of minor details during the day with testing and training of the coaster is going on after dusk.

I was excited to stumble upon Imagineers still performing a safety check of the attraction with a rig built specifically for making sure proper clearance is provided all around the track. You don’t want fingers, hands, arms or heads to collide with anything along the track. That could hurt.

They actually ran this test with a different rig earlier in the build, so this run looks like a final inspection. At this point in the inspection, they needed to bring down a rig with a winch on it to haul the clearance rig up the hill. I took the opportunity to snap some closeups and put together a short video narrating what I think we’re seeing.

I don’t have any insider information, but it seems like they’re cutting it pretty close. With media arriving tomorrow and a big event scheduled for Thursday night, I’m sure they would have been more comfortable having a few days of testing the ride with cast members or soft openings with guests. That said, they have had extras on the ride for some filming, plus Imagineers, a few Magic Kingdom managers and the cast who will be working the attraction have all gone for a spin or two. They just don’t know exactly how the load and unload procedures will work when faced with actual human bodies. Sometimes that’s a hiccup.

Even the limited testing we’ve seen is a good sign. But I can’t help but be a little nervous as to whether the attraction will be ready to go on the 2nd after the ribbon is cut. There are a few ominous signs, but on the other hand, it could be nothing. Are you looking forward to riding Seven Dwarfs Mine Train?