Once Upon a Time 3-18: Bleeding Through Preview 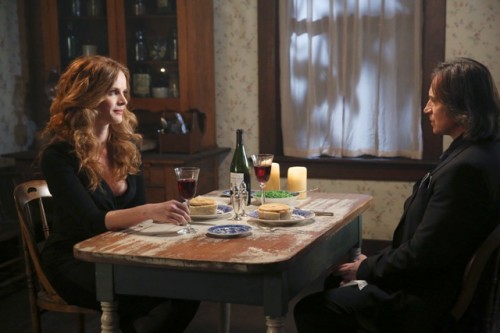 Poor Hook! Just when he thought he had one obstacle out of the way so he might have a chance with Emma, Zelena curses their love and then threatens Hook if he doesn’t kiss Emma, thereby taking all her magic from her. (Although really, how twisted is that relationship if we stop and think about it. The connections between Hook and Neal and Neal’s mom and Emma and Neal and…. Really, I see Jerry Springer in their future.)

But the focus is shifting back to Regina and Cora this week. Yes, you read that right, Cora. In the modern Storybrooke, Regina is going to be trying to use magic to reach the other side and find out from Cora exactly why Cora gave up Zelena in the first place. It might help them come up with a way to defeat Zelena.

Speaking of which – someone is going to stumble on Zelena’s ultimate master plan. And Zelena is going to find and steal Regina’s heart. So she’ll have a heart and Charming’s courage. Now she just needs a brain. Might we be seeing Dr. Whale again soon or is that why she wants Snow’s baby? And what does she hope to get from Gold with a nice dinner outside his cage?

Meanwhile, the flashback is going to fill in Cora’s back story with Rose McGowan reprising her roll as young Cora. We’ll get to see first hand how and why Cora gave up Zelena.

I can’t wait to see how this all plays out. Despite Easter, it will air at the usual time (it’s the only one of ABC’s usual Sunday shows on this week in fact.) And I’ll be recapping over at Carstairs Considers as usual after I’ve seen it.