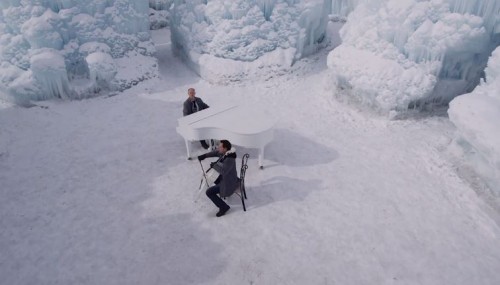 Known for their sweeping YouTube videos as much as their sweeping melodies, The Piano Guys have gained quite a following. Released today is their latest video, which is, of course, their take on Let it Go from Disney’s “Frozen.”

Like the Alex Boyé video we posted earlier, The Piano Guys aren’t content with a straight cover. To take it up a classical notch, they’ve layered in strands from, appropriately enough, the Winter season of Vivaldi’s Four Seasons.

This was also performed at an Ice Castles attraction, although a different location than the Boye video.

According to The Piano Guys, “The location was a huge factor in picking the song Let it Go from Disney’s movie Frozen. Ryan Davis from the Ice Castles contacted Paul a year ago wanting us to film there, but at that time we could never think of a song that would do it justice until last December when Paul took his family to see the movie Frozen. After coming out of the theater, he knew what needed to be done and got the ball rolling.”

Have your own Frozen video? You could enter it in a GMA contest.