The Candy Caper – A Walt Story 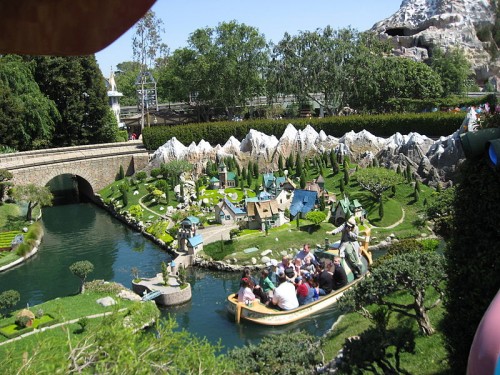 I love reading first hand accounts of Disneyland cast members encounters with Walt Disney. We have had our own little series here on the blog from my Aunt Linda, but here’s a story from a cast member who worked the Storybook Canal Boats in the late 1950s.

I worked at Disneyland throughout college, first as a summer casual on several attractions, and then, from early 1959 through 1962, as a permanent part time employee on the Storybook Land canal boats. During my employment as a boat operator, a non-stop journey through the miniature landscape of Storybook Land was timed to take approximately seven minutes. Ride operators were cautioned not to depart from the script and reverently recited the same “official” spiel more than 100 times a week. Adjusting to this monotony did not fit the student’s ideal of working at Disneyland.

One summer, a Casey Jr. Circus Train “engineer” initiated a game of skill to fend off boredom. Each day he bought a bag of salt water taffy at a concession stand. He would carry the candy with him as he drove the train around and through Storybook Land passing within a few yards of the canal at some locations. When he judged he would be in close proximity to a boat, he blew the train’s whistle signaling the boat operator to get ready

Read the rest on the Disneyland Guru tumblr…