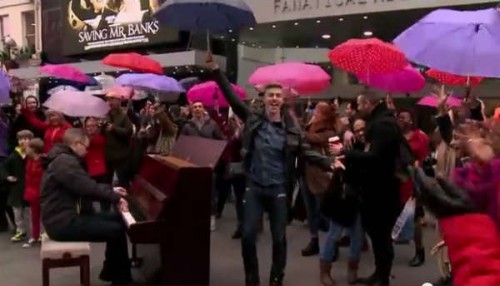 Here’s a little fun for a Sunday afternoon, to celebrate the UK release of the Disney movie Saving Mr. Banks, fans gathered at the spot where Mary Poppins first opened almost 50 years ago in London’s Leicester Square, for an rousing rendition of “Let’s Go Fly A Kite.”

Walt Disney Studios UK recorded this and placed it online for all to watch. So here for your enjoyment is that video:

Perhaps have a sing-along of your own today to celebrate Disney’s masterpiece.

Saving Mr. Banks is in theaters now, and Disney’s Mary Poppins 50th Anniversary Edition is on DVD and Blu-ray now, as well.