Once Upon a Time Preview: Episode 3-8 – Think Lovely Thoughts 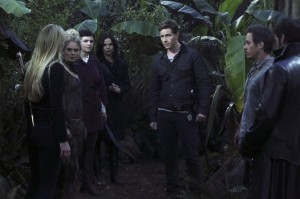 With only four weeks left in Neverland, we’re beginning to build toward the climax. Hook, Neal, Mary Margaret, David, and Emma think they have a way off the island. Meanwhile, Gold and Regina think they can use Pandora’s Box to defeat Pan without Gold having to give his life.

And it’s a good thing they are ready for the showdown because Pan has finally convienced Henry that he has to save magic and Neverland. However, what Henry doesn’t know is that it will cost him his life.

I’m also hearing something of a twist coming this week, although I have remained spoiler free at this point.

As if that weren’t enough, we’re going to flashback to Rumplestiltskin as a boy and see a bit more about his relationship with his own dad. We’ve heard hints about it but never actually seen just how bad it was, so that will be interesting.

All this and we actually get to hear Pan’s shadow speak. Marilyn Manson has the honor of providing the voice.

Obviously a lot will be happening Sunday night, but that’s not a surprise. They packed a lot into this show. Can’t wait to watch it, and I’ll be recapping over at Carstairs Considers.