Episode Preview: Once Upon a Time 3-7 – Dark Hallow 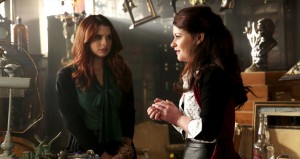 Those who were looking forward to Ariel showing up were very happy with last week’s episode, I’m sure. They put their own twist on The Little Mermaid, and the outcome was very fun. But we aren’t through with Ariel yet, as JoAnna Garcia Swisher is back on this week’s episode of Once Upon a Time.

We’re also going to get our first visit to Storybrooke (Yeah!!) this season since Ariel is heading there to get some object that Gold and Regina have decided they need to take down Pan. But it looks like things won’t go well since two people will show up in town to stop her at all costs. Who are they? What is there interest? Are they Greg and Tamara’s co-workers?

Meanwhile in Neverland, David is going to have to deal with Mary Margaret’s wrath not that she knows the truth about him having been poisoned and his cure that will keep him in Neverland forever. Neal, Hook, and Emma are going to try to hunt Pan’s shadow, which will not be easy.

No word on a flashback, but I think we’ve got a packed episode with just the current storyline. See you at Carstairs Considers on Monday with my recap.

previousWhat’s Your Disney Side?
nextEpisode Preview: Castle 6-8 – A Murder is Forever