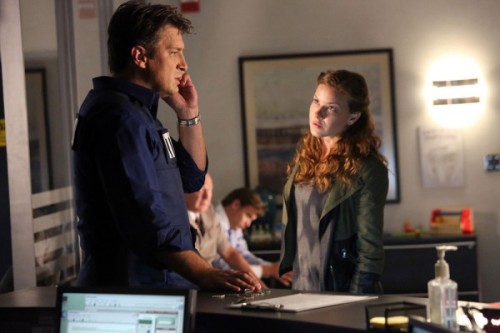 At the end of last week’s episode, Beckett got the news that she’d been fired from her job in DC. What’s the next step in her journey? I’m sure we’ll get a bit of a clue in tonight’s new episode of Castle.

But the main plot involves a hostage situation gone horribly wrong. The person holding the hostages is claiming to be innocent of a murder and wants to deal with Castle and only Castle. Looks like we’ll see Castle in his “Writer” vest again as a result. That always makes me smile.

I don’t think that Beckett will be back at the 12th very quickly, so I’m also wondering how they will keep her involved in cases or get Castle involved in too many more period until she does. In the mean time, this has the trappings of a great way to move Beckett’s character forward and to be a great hour of television period.

The show airs tonight, Monday Oct 14th at 10PM ET. My recap will be up Tuesday evening over at Carstairs Considers.

previousOnce Upon a Time Episode 3-3 Preview: Quite a Common Fairy
nextMarvel Universe LIVE! goes into Production