Once Upon a Time Episode 3-3 Preview: Quite a Common Fairy 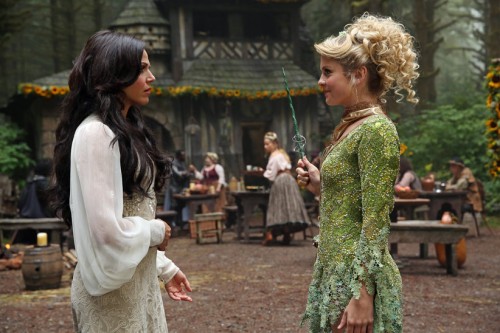 Our journey through Neverland continues tonight, and we meet a familiar resident of the land for the first time. Our heroes will run across Tinker Bell in the all new episode.

It was teased early on that someone from the core cast was going to have a surprising connection to the fairy, and from the previews, it looks like that person is Regina. This connection will form the basis of the flashback portion of the episode.

Meanwhile, over in modern day Fairytale, Neal is going to be continuing his quest to reconnect with Emma, something that is going to require an object of Robin Hood’s.

And our heroes in Neverland? They will be trying to track down Tink in the theory that she could lead them straight to Pan. Obviously, this version of Tinker Bell is not hopelessly in love with Pan like the one in the Disney version if Hook thinks she would help them. And Pan will reveal to Henry why he was taken in the first place.

Of course, we’ve got Emma’s confession from last week that she feels like an orphan and Pan’s threat that he intends to kill both Mary Margaret and Charming to deal with. Not to mention the fact that Charming has been hit by an arrow dipped in a slow acting poison, a fact that he’s hiding from everyone else.

No word on Gold or Storybrooke, but I have a feeling this will be a jammed packed episode anyway. They always are.

Can’t wait to find out what happens tonight. And I’ll be recapping it over at Carstairs Considers after it broadcasts here on the west coast.