Editor’s Note: I have not been presented the opportunity to view Blackfish and urge you to consider both sides of the argument before drawing any conclusions. A good place to start is this NY Times article on SeaWorld Park’s and Entertainment‘s response to the movie and what it sees as distortions of the facts and message. I want to thank Mike Bastoli for continuing to post here on the blog; even when I’m not 100% comfortable with his topics, I’m glad I can provide a forum for his ideas. 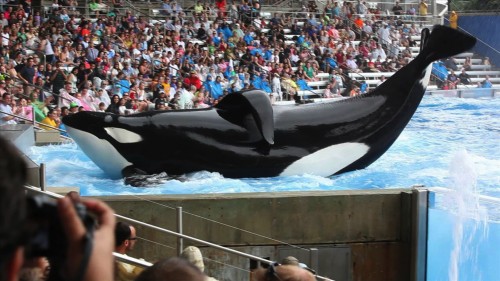 First of all, I’d like to thank John for giving me the opportunity to comment on Blackfish here. Even though we are of different opinions on whether orcas—killer whales—should continue to be kept in captivity at SeaWorld and places like it, we both agree that everyone should have an opportunity to evaluate the facts and make up their own mind on the issue. Really, we are the jury.

Blackfish begins with a black screen and a terrifying 911 call: “A whale has eaten one of the trainers,” the voice on the phone tells the dispatcher. That call was made on February 24, 2010, moments after SeaWorld Orlando trainer Dawn Brancheau was killed by Tilikum, a 12,000-pound male orca who had taken human life twice before.

The documentary, which is in a sense a heavily-abridged, on-screen version of David Kirby’s gripping 2011 book Death at SeaWorld (in paperback this month), examines the circumstances that led up to that awful tragedy.

In doing so, Blackfish presents stirring, at times infuriating, evidence that orcas do not belong in captivity. Not only for the very real dangers this presents their human keepers, but for the toll it takes on these intelligent, emotional creatures. 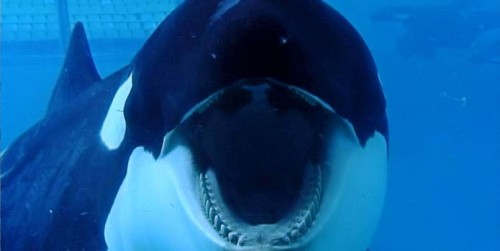 Some of the scenes in the film are truly heartbreaking: Baby whales being separated from their moms—not only during the early wild captures, but much more recently with whales born in captivity—the mothers shrieking long-range calls for hours, desperately trying to find their young.

Time and again, the filmmakers demonstrate that SeaWorld’s narrative does not match up to the facts. Take the case I just mentioned. SeaWorld has long said that its “Baby Shamus” were mature at the time of separation, but in the wild, orcas (males in particular) never leave their mothers’ side, even into adulthood. There is something very wrong with breaking that bond.

There are countless other instances of SeaWorld bending the truth, or outright lying, to shape the message that orcas live happy lives in captivity. A few of these are discussed in Blackfish. The issue of orca lifespans in the wild is a classic example of SeaWorld misinformation. Likewise, the slumped over dorsal fins on 100% of captive males; SeaWorld claims 25% of males suffer this in the wild; in reality, the highest-quality, peer-reviewed research demonstrates it is about 1%.

No one doubts that the trainers at SeaWorld, past and present, deeply love the animals in their care. The issue is captivity itself. How can you confine a creature that swims a hundred miles a day in the open sea in a chlorinated pool thousands of times smaller than its natural range and not expect it to act up once in a while, even violently? Gabriela Cowperthwaite, who directed Blackfish, has publicly stated that she does not wish to see SeaWorld close its parks (neither do I or most people) only change course away from captivity of intelligent marine mammals. There are a number of ways that the company could do this and stay in business. The argument that the public, especially children, have to see a real, live whale to learn about and love them doesn’t hold up (is there an animal more loved by kids than dinosaurs?).

Whether you come into the theater already convinced that keeping killer whales captive is wrong, as I did, or you believe that it is a humane endeavor that should continue, you should see this film. In fact, you deserve to see it.

Blackfish is now playing in Los Angeles, New York, and Toronto. It will open in additional cities beginning this Friday (see here for a list of theaters) and will air on CNN on October 24 at 9 PM ET.