Editors Note: Mike has asked for permission to share this here. I’m allowing it because everyone needs to make up their own mind about SeaWorld’s role in animal care and conservation and more data is almost always better than less data. The movie ‘Blackfish’ is a biased one-sided look at that role. I’ve tried here on the blog to report honestly about the tragic incident surrounding Tilikum and the park’s ongoing fight against OSHA.

My personal beliefs are that it is best for SeaWorld to continue its efforts to train Killer Whales to both learn more about them and to educate people around the globe to the wonder of the species and the risks facing them in the wild. If SeaWorld was forced to end this practice many animals would suffer and die needlessly. While a life of captivity is not the same as living freely in the ocean, it is not ‘slavery’ as the animal rights groups portray it. It is a life of care and attention that can extend life and reduce the chances of awful death at the hands of a poacher or starvation, while also contributing to a common good. That a few animals are selected or bred for this is a good thing in my book, because the common good is served and no actual harm is done to the animals. 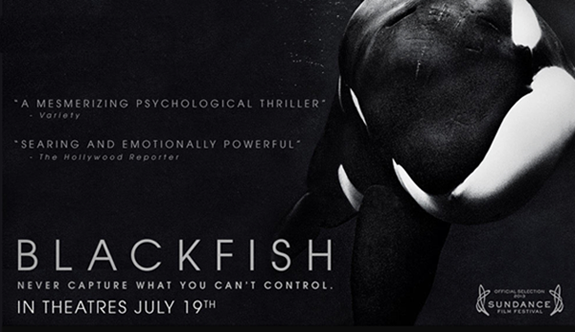 The first trailer for Blackfish is up at Apple’s iTunes Movie Trailers page. The upcoming documentary from Magnolia Pictures and CNN Films is centered on the story of Tilikum, the orca that killed three people while in captivity, most recently in 2010 at SeaWorld Orlando.

With the tagline “Never Capture What You Can’t Control”, Blackfish does not purport to be objective or balanced; it is intended to be an indictment of the practices at SeaWorld and other marine parks that keep captive “killer whales”. The film is getting strongly positive reviews from critics, with Indiewire proclaiming that it “ensures you’ll never go to SeaWorld again”.

While I happen to agree with the premise of Blackfish and similar documentaries like The Cove—that the captivity of intelligent aquatic animals is a cruel and dangerous business—it is only one side of the argument and, of course, others disagree. But I’m sure everyone can agree it’s a discussion worth having. (SeaWorld, which is one of Disney Parks’ biggest competitors, declined to comment for the documentary.)

Blackfish opens in theatres on July 19 and is rated PG-13 for “mature thematic elements including disturbing and violent images”. It is expected to see its cable debut on CNN sometime this fall.