Move over Turkey Leg, the Pork Shank is in Town 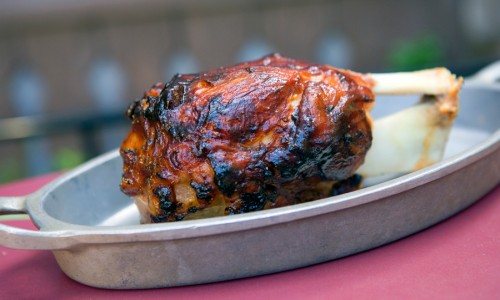 You’ve heard the rumors, Disneyland guest favorite giant turkey legs are really snipped from the leg of an Emu. That’s not true, but what is true is that the lovely, simple, yet delicious pork shank has made its way to Disneyland to give the old bird a run for its money. It’s a hefty 22 ounces or so, so you might want to share this low-carb, high-protein indulgence.

When New Fantasyland opened, we interviewed the chef who created the pork shank for Gaston’s Tavern. Slightly different than the east coast version, the Disneyland pork shank is also finished with a BBQ Glaze. The lack of BBQ sauce was my only complaint about the New Fantasyland pork shank, it was a minor quibble, but apparently I wasn’t the only one with the complaint.

The slow-roasted pork shank is now on the menu at Edelweiss Snacks in Fantasyland Disneyland. And for the summer (June 14 through September 2), you’ll also find it on the menu at Woody’s All-American Roundup at Big Thunder Ranch Jamboree in Frontierland.

Will you be adding the pork shank to your tasting menu on your next trip to Disneyland or the Magic Kingdom?