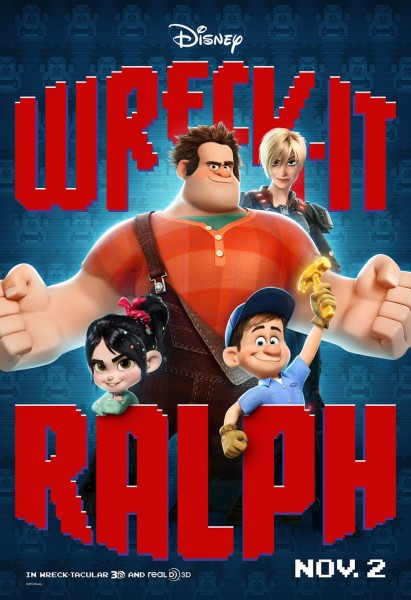 This year Disney released two animated features (Three if you count Frankenweenie, but we won’t include stop-motion for the purpose of this article). One stars a princess who breaks from tradition and discovers that family is at the core of what’s important, the other features incredible worlds crafted from scratch, ground breaking computer animation, and a story that is full of heart. Normally, you’d say Disney Animation released the Princess film and Pixar the other, but this year the roles are reversed. With Brave, Pixar ventured into what was traditionally Disney’s territory, so it’s only fair that Disney Animation Studios returns the favor.

I’m happy to say that with Wreck-it Ralph, Walt Disney Animation Studios has returned to the top of the animation game, matching, if not surpassing, anything you would expect from its more successful partner up in Emeryville. It does this while remaining true to the core values of Disney animation, which is a focus on great story and characters who you really feel for. 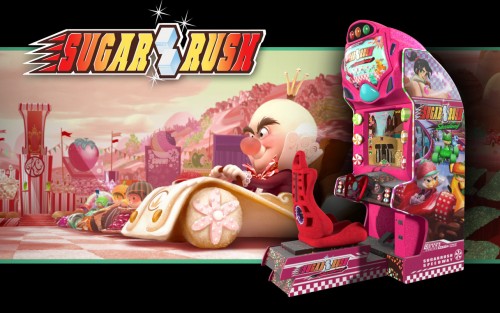 In Wreck-it Ralph, Disney attempts to do for video games what Pixar’s Toy Story did for toys; Give us insight into the world that goes on when humans aren’t around. In this case the movie starts inside the classic 1982 arcade game Fix-it Felix Jr. The titular character is the game’s bad-guy; always destroying and then being defeated night game after game. After 30 years this begins to weigh on him so much that he visits a support group for video game bad-guys. But what really sets him off is when the other characters have a party celebrating the game’s 30 years of being plugged in and fail to invite him.

Ralph sets off on a quest when one of the game’s good guys unintentionally gives him hope that he may one day be accepted amongst the good guys. As you can tell, we now have all the ingredients for a hero’s journey of epic proportions.

Wreck-it Ralph delivers on that journey in every way. There’s romance, heart break, self-discovery, and even a princess thrown in for good measure (I guess Disney just couldn’t resist).

The villain of the story is one of the best ever created for a Disney film. Voices masterfully by Alan Tudyk. I’ve known Tudyk from his roles in the Whedon-verse (Wash in ‘Firefly’ and Alpha in ‘Dollhouse’). ABC fans know him from his current role on ‘Suburgatory’ and a great run in the first few episodes of ABC’s ‘V’.

Tudyk is also no stranger to voice acting. As King Candy, he channels Ed Wynn (Uncle Albert from ‘Mary Poppins’ and The Mad Hatter in ‘Alice in Wonderland’) so uncannily, I sometimes wondered if I wasn’t back in Wonderland myself. The character design of King Candy helps a bit there, but Tudyk really stole the show for me.

That’s not to say John C Reilly as Ralph, Sarah Silverman as Vanellope von Schweetz, Jane Lynch as Sergeant Calhoun, or Jack McBrayer as Fix-it Felix were any slouches either. Reilly is cast perfectly as a videogame brute, and Silverman can pull off annoying like no one else. Yet, both leave plenty of room for their characters to grow. McBrayer has earnest down pat as Felix and Lynch gets everything out of the story created for her character. By far this was one of the best voice casts Disney has had in a long time.

You don’t have to be a video gamer to enjoy Wreck-it Ralph. There are a number of design elements that insiders will pick up on, but you can still be fully immersed in the story without knowing exactly what reference was being made. (Read Whit’s interview with Director Rich Moore for more on how this was accomplished.)

Finally, make sure you arrive early enough to view Paperman. It’s an animated short with Freddy Moore inspired Disney character design, but a totally unique animation method. I’m definitely excited about the potential for the new animators tool used to create this blend of hand-drawn and CG animation.

See Wreck-it Ralph starting this Friday in a theater near you.