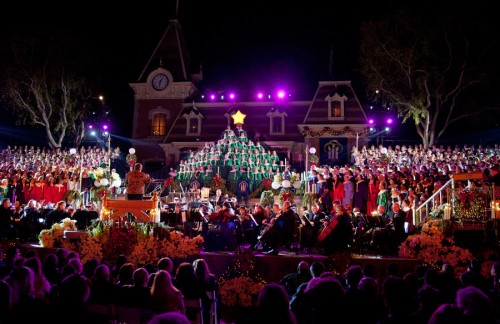 With the recent expansion of Cars Land, the Disneyland resort is now bigger than ever and welcoming more guests than ever. Beginning November 12th, the holiday line up for the parks will include new holiday décor for Cars Land and Buena Vista Street in DCA, Ice Skating at Downtown Disney, special fireworks, the Christmas Parade, and Snowfall in Disneyland just to get started.

As we mentioned in August, three is a new expanded schedule for the 2012 Disneyland Candlelight Ceremony and Processional. Candlelight will now run a total of 20 nights with two performances each night. Below is the list of currently scheduled narrators for shows from December 1-20:

*December 1-2 performances are by invitation only, as they have been since 1958, when Walt Disney first held these private celebrations to thank partners in the community for their support throughout the year.

More details of holiday offerings at Disneyland Resort below the cut:

Celebrating their first Disneyland Resort holiday season, Cars Land and Buena Vista Street, the new lands of Disney California Adventure, will be decked out in unique and festive seasonal décor. 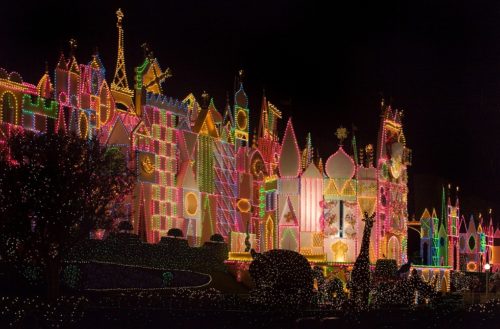 At Disneyland, holiday guests will find the traditional snowdrifts and icicles adorning Sleeping Beauty’s Winter Castle. After dark, a sensational holiday lighting and special-effects show carries the magic of the holidays from the castle all the way to the Christmas tree in Town Square. The 60-foot-tall Disneyland Christmas tree is specially designed to present a nightly holiday light show like no other with more than 62,000 energy-efficient LED lights.

The Sleeping Beauty’s Winter Castle presentation unfolds throughout the evening in three acts, each of them featuring a touch of winter snow on Main Street, U.S.A. The finale of the show includes the legendary “Believe … in Holiday Magic” fireworks show, which takes guests on a journey of sights and sounds of the season and ends with a touching rendition of “White Christmas,” along with a climactic snowfall swirling down on Main Street, U.S.A., “it’s a small world” Mall and New Orleans Square.

“A Christmas Fantasy” parade has become a holiday tradition in Disneyland. Guests enjoy watching as Disney characters celebrate the magic of the season, wrapping gifts, baking holiday treats and preparing for the arrival of Santa Claus, who shouts a jolly greeting to spectators along the parade route. Mickey Mouse and Minnie Mouse even take to the ice for some skating fun.

More holiday favorites return to Disneyland, adding to the merriment.

For the first time during a Disneyland Resort holiday season, guests in the Downtown Disney district will be able to go skating on an outdoor “The Secret of the Wings” ice skating rink, located near ESPN Zone and AMC Theatres. Ice skates will be available for rent. The rink pays tribute to “The Secret of the Wings,” the new Tinker Bell adventure released to DVD and Blu-ray by Walt Disney Studios Home Entertainment.

Holiday shopping at Disneyland Resort offers an array of merchandise available exclusively at Resort theme parks and the Downtown Disney district. Along with ornaments, holiday-themed Mickey Mouse ears, jewelry and tasty holiday sweets, guests can discover a new line of Cars Land holiday-inspired merchandise that is sure to have you Dashing Through The Snow and Wishing others a Happy New Gear.

Disneyland Resort hotels join in the holiday festivities with twinkling lights and ornaments, special entertainment and holiday dining with themed menus. Expanded hours at both Disneyland Resort theme parks extend the family fun and offer more time for guests to enjoy all there is to see at do at Disneyland Resort.